Greater Sudbury has done a lot to restore its ravished landscape over the past three decades, but there is much more to accomplish, said Stephen Monet, Greater Sudbury manager of environmental planning initiatives.
Jan 25, 2010 8:19 PM By: Bill Bradley 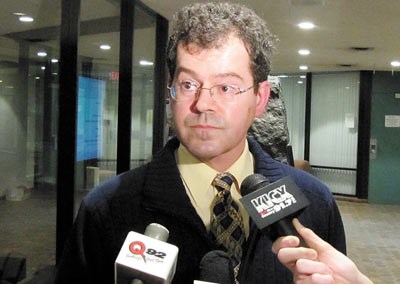 Stephen Monet, Greater Sudbury manager of environmental initiatives, said the city still has a huge area that has not been regreened by liming the soil and planting trees and shrubs. This area is about 30,000 hectares, equal to about 10 times the area that has already been restored over the past 30 years. Photo by Bill Bradley,

Greater Sudbury has done a lot to restore its ravished landscape over the past three decades, but there is much more to accomplish, said Stephen Monet, Greater Sudbury manager of environmental planning initiatives.

In a presentation to the policy committee of city council Jan. 20, Monet told city councillors that, while the city has been able to regreen 3,350 hectares over the past three decades, there still is 30,000 hectares that have neither been limed to reduce acidity, nor planted with trees. He said these areas are out of sight away from major road arteries.

Monet received unanimous approval from city councillors at the policy committee meeting to pursue his Biodiversity Action Plan, a strategy for establishing a healthy environment for plants and animals by increasing their numbers and variety of species in Greater Sudbury.

“Ban Ki-moon, United Nations Secretary General has designated 2010 as the international year of biodiversity. He has called on all people to protect life on the Earth,” Monet said.

“In Greater Sudbury we have our own Biodiversity Action Plan. It is a continuation of three decades of excellent work in regreening, but it is also a leap forward.”

He said there was now more money made available by the two major mining companies allowing more plants and trees to be planted and there was a commitment by the partners involved in the project to involve more of the public to help shoulder the burden of the effort.

“Planting trees and shrubs is fundamental. They are the backbone of the effort because they modify the environment so that other species such as wildflowers can live beneath them,” Monet said.

But Ward 3 Coun. Claude Berthiaume balked at the time it would take to finish the job.

“If it took 30 years to restore 3,350 hectares then it will take another century to cover all the areas. This is important for our children and our grandchildren. We need to accelerate this.”

But Monet said the new money both companies have pledged last fall, $2.25 million over five years, will help.

“This is new money allocated by Vale Inco and Xstrata. It is not coming out of their existing regreening work budgets. It represents increasing the regreening budget for the area by five times,” Monet noted.

Berthiaume asked if the mining companies and senior levels of government needed to ante up more money.

Monet said the increased work resulting from increasing the budgets needed to be monitored carefully.

“We want to be able handle working on larger areas doing specific actions. The companies have told us they were in this effort for the long term.”

Monet also reminded councillors that both Vale Inco and Xstrata have spent hundreds of millions of dollars in reducing their emissions over past decades. Without those reductions newly planted vegetation could not survive, he added.
Involving the public is critical, he said.

“We will have programs for individual gardeners so they can help propagate the plants we will need. We will involve schools in this effort.”

Monet said the public will be asked to help monitor wildlife, as they return, in their own backyards and at their summer residences. That can occur, for example, through bird watching counts at bird feeders and by frog counts in rural areas.
“We hope to roll out these programs over the next few years.”

More than 600 people — from stakeholders to members of the public — were consulted. As a result of this consultation, changes and additions were made to the draft biodiversity plan in 2009.

The plan, entitled Living Landscape: A Biodiversity Action Plan for Greater Sudbury, is available in hard copy at all branches of the city’s libraires and electronically at www.greatersudbury.ca/biodiversity.