Last time review was conducted, city went from six to 12 wards, with one councillor for each ward
0
Oct 1, 2019 8:57 AM By: Darren MacDonald 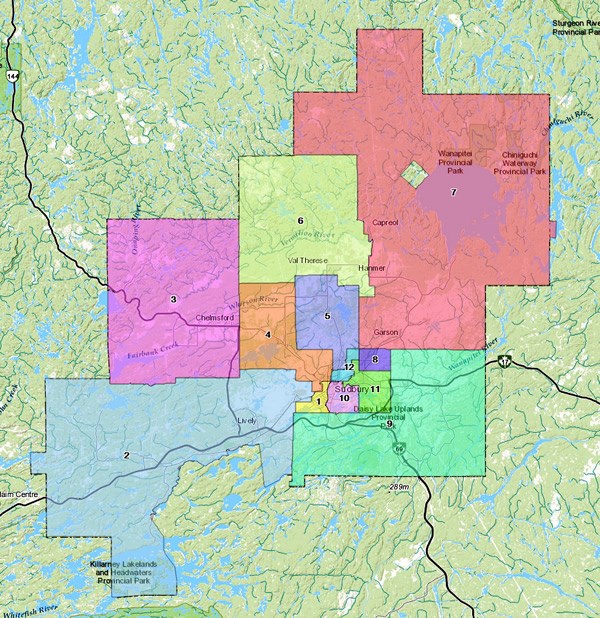 The last time there was a review of the way Greater Sudbury is governed was in 2005, when the city went from a six-ward, two councillors per ward model to the 12 ward, 12 councillor model in place today. (File)

The demographics of Greater Sudbury's 12 wards aren't expected to change dramatically enough over the next decade to require a review, says a report headed to city council next week.

The report is part of direction to staff from a 2015 ward review, in which council asked for a detailed report on population and other information after the 2018 municipal election to evaluate whether any changes need to be made.

Under a ward boundary review policy adopted in 2008, a review of wards is automatic when the population of a ward is 25 per cent higher or lower than the combined average of all 12 wards.

Using population projections compiled by Hemson Consulting, by 2036 the biggest ward will be Ward 12, which includes the Flour Mill area, at 15,850, or 10.9 per cent bigger than average. Ward 8 will still have the fewest residents, with 11,910 or 16.7 per cent lower than average.

“The fluctuations in each ward from the average number of electors do not currently meet or exceed the thresholds in the city’s Ward Boundary Review Policy, nor are they anticipated to meet or exceed those thresholds based on current projections,” the report says. “As such, staff do not recommend proceeding with a review of the existing ward boundaries at this time.”

The last time the ward system was reviewed was in 2005, when council of the day voted to end the system put in place after amalgamation. That was a six-ward model, with two councillors from each ward, designed to reduce “inside/outside friction,” the report says, “and to prevent dominance by any one area.”

But problems quickly emerged with that model, since residents weren't sure which councillor to contact if they had issues.

“It was found at times to be cumbersome with dual accountabilities for the ward and overlap of work and responsibilities between the councillors,” the report says, explaining why the system was changed. “Following a review, the existing six wards were divided in two with one councillor representing each ward.”

While council can initiate another review of its ward system whenever it wants, it would require hiring an outside firm to do the review, and would take as much as two years to complete.

“Public engagement aimed at informing residents about both the review and key factors being considered would form the foundation of the process,” the report says. “The consultant would gather public input and feedback from citizens about the existing governance structure, alternative models and the impact that any changes would have to the existing ward boundary structure.

“Consultants would also meet with members of the sitting council in order to gather their opinions and feedback through individual interviews.”

The report would then come back with recommendations on a new model, which would then go to city council for a decision.