Held up by KED fight, councillors asked for alternative location other than Sudbury Arena
May 22, 2019 2:55 PM By: Darren MacDonald 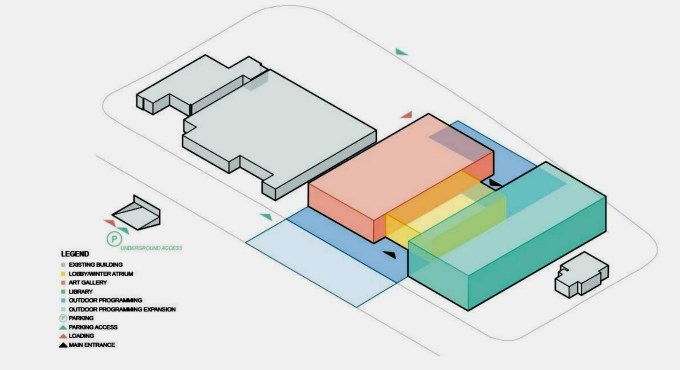 With the Kingsway Entertainment District locked in an uncertain legal battle, city staff have found a new downtown location for the new art gallery and library, two of the three projects that make up The Junction.

City council asked staff in February to find another option for the two projects because the original site, the current Sudbury Arena on Elgin Street, won't be available at least until the planning fight over the KED is complete.

A report headed to city council May 28 recommends city owned land on Shaughnessy Street be used to house the $42 million art gallery/library project. The two were split from the $65 million convention centre because they are eligible for funding from upper levels of government. But those funds can't be applied for unless the project is close to being shovel ready, something that can't happen on the Elgin Street location until the KED battle is resolved.

*The city owns the land, and the STC and the multicultural association are interested in partnering with the city, the report said, and the site has some advantages. Shaughnessy Street isn't as busy as Minto Street which borders the arena, and the soil on the property may be better suited for the underground parking.

But it would eliminate 110 parking spots downtown, and is next to Paris Street on one side, a very busy roadway.

“Given the results of the analysis undertaken, staff are satisfied that the Shaughnessy East site is the best alternative site for the library/art gallery project and meets the direction of council provided in February 2019,” the report said. “A resolution to select this site as the new preferred site ... has been prepared for council’s consideration.”

If approved, staff will issue a pre-qualification tender to for a design for the new location, and get ready for the eventual design/build RFP.

With the Junction and other projects removing so much parking from downtown, the report said staff will look for private-sector interest in an underground parking garage for the site.

“Based on the results of that work and other parking-related initiatives, staff will return to Council with a detailed parking expansion plan as part of a comprehensive project update prior to issuance of the design build RFP,” the report said.

The report also addressed an initiative last month from Sudbury Wolves owner Dario Zulich, who owns the Kingsway land where the KED is supposed to be built. Zulich proposed moving the convention centre to the KED as a P3 project, arguing he could build the centre for one-quarter the cost it would take to build it downtown. He sent a letter to CAO Ed Archer in April asking the city enter into talks about his idea.

“Staff will continue to engage with the land owner to better understand the concept, clarify the intent of the development, evaluate any associated business plans, and analyze the implications for the convention and performance centre at the Junction,” the report said. “Recommendations on whether and how the city could consider or advance this proposal will come back to council in the coming months.”

*An earlier version of this story incorrectly said Greater Sudbury did not own some of the property. The story has since been updated.