But for Shlemkevich, a hardcore football fan and graduate student in the University of Guelph’s School of Landscape Architecture, that may be a blessing in disguise.

It turns out she’ll be busy that night.

In a long-term care facility.

It’s an unusual way for a football fanatic like Shlemkevich to spend Super Bowl Sunday. But she hopes it’s the start of something game changing, for long-term care residents everywhere. 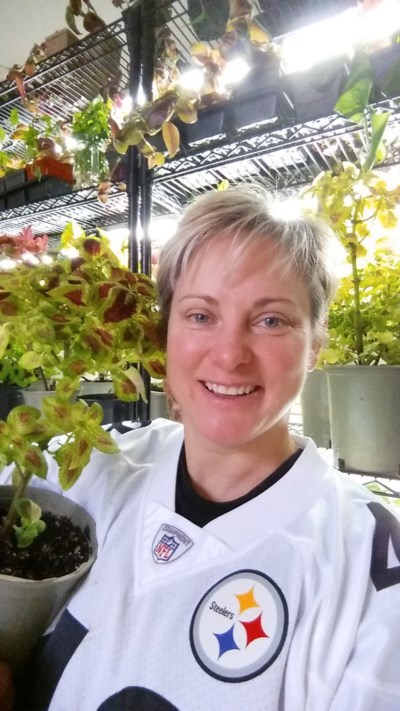 Shlemkevich and her academic supervisor, Prof. Nathan Perkins, are trying to understand if the presence of nature — plants, flowers and other greenery — can positively influence the eating habits and dining experience of residents in long-term care facilities.

Their research locale is St. Gabriel’s Villa, a 140-resident facility in Chelmsford. Some of the residents experience the same problems as those in other such facilities; that is, depression and poor nutrition.

Depression happens as a result of changes in body chemistry, isolation, medication and loss of friends and family, among other things.

When it occurs, appetite inevitably fall offs. And when residents don’t eat, they end up malnourished, despite the best efforts of staff.

The atmosphere in dining halls compound the problem. Residents see them as busier, noisier and less welcoming than their own homes. Such factors may result in residents eating faster and poorly, just to get back to their rooms. Or they may shun the dining hall altogether, and miss important social interactions that come with dining together.

Shlemkevich has seen these situations up close. Before entering graduate school, she worked for 10 years as a long-term care staffer. At St. Gabriel’s, she was a life enrichment assistant. She developed and ran activities for residents to encourage social interaction, physical activity and cognitive stimulation, including a horticulture therapy program, getting residents involved in planting and maintaining greenery.

For this research, Perkins is the ideal teammate. He’s worked on outdoor landscape design projects with several long-term care facilities, to promote a more welcoming and positive experience for residents. As well, he’s helped create calming indoor environments in psychiatric hospitals on three continents, and in places such as casinos, to counter overstimulation.

Together, he and Shlemkevich have the bases covered.

Now, their project is going from planning and approvals, to practice. For the past six months, Shlemkevich has been raising nearly 100 plants — ivy, coleus and spiderwort — in a makeshift greenhouse and spare bedroom in her house in Sudbury.

On Sunday, after dinner when residents return to their rooms, she’ll haul the plants into one of St. Gabriel’s dining halls, and incorporate them into what’s called a green wall.

This particular wall model is a free-standing, two-part structure on casters, about eight feet wide and five-and-a-half feet tall. It has pockets to hold the plants, where they can be watered and tended to. The wall will be a central and obvious feature in the dining hall.

For the next six weeks, Shlemkevich will work with St. Gabriel’s staff to monitor the food intake of 34 residents who normally eat in the particular hall. She’ll collect two meal’s worth of data for two weeks. Then she’ll compare consumption over that period to the two weeks before the green wall was introduced, and for two weeks after it’s removed.

She and Perkins are optimistic about the greenery project’s success.

Get Ready for La Nuit!