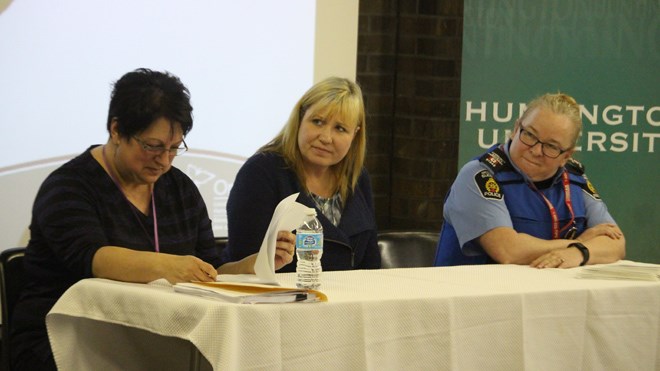 Huntington University hosted a symposium on elder abuse and neglect on Jan. 19.

The symposium was put on by the university's Gerontology Society in collaboration with the Gerontology department at Huntington and the Canadian Association on Gerontology Student Connection.

Three guest speakers from three different branches of senior care spoke at the event, with the common theme circling back to the need for access to resources for seniors.

Josée Miljours was the first to speak on the evening. Miljours is a consultant for the Northeast Region of Elder Abuse Ontario and is one of two consultants in Northern Ontario.

"Elder abuse is the single or repeated act or lack of appropriate action in any relationship where there's an expectation of trust that would cause harm or distress to an older person," said Miljours.

"The abuser could be a spouse, a child, a family member, a friend or a caregiver."

Miljours explained that in many cases, seniors don't know where to turn or how to determine whether they are the victims of abuse.

"Our website (www.elderabuseontario.com) has many resources for seniors and educational tools," said Miljours. "There's fact sheets, safety guides, videos, brochures, flow charts and all kinds of wonderful things for seniors. Sometimes they (seniors) don't know if they're victims and they'll think 'oh, my son yells at me, is that elder abuse?' and they can look online and that's the first step towards getting help."

Greater Sudbury Police senior liaison Lise Perreault was another guest speaker on the evening and echoed Miljours' point of seniors not being sure where to turn when they are the victims of elder abuse.

"It can be something as simple as family members being frustrated with a senior member of the family and that gets them upset," said Perreault. "Seniors don't know where to turn or what resources are available so they call the police. These aren't criminal matters but it is something that needs to be dealt with. Often times they just need someone to talk to."

Having someone to talk to is an important factor, according to Roxanne Makela of Behavioural Supports Ontario, but she also makes note that it's important for outsiders to be aware of seniors in their family and community and to notice warning signs of neglect.

Makela cited a case where BSO was called in when a 65-year-old man was seen eating food out of his garbage can outside, and a neighbour called BSO.

"He was taken in by BSO and it was discovered that he wasn't storing food properly and as a result had stopped eating and slipped into a delirium," said Makela. "BSO was able to set him up with Meals on Wheels and his case was solved in three months."

Miljours commended the work of BSO in their analysis and ability to find the right solution.

"It's so important to have an organization like BSO because they keep people like this from falling through the cracks," said Miljours. "This man was able to stay at home rather than just being put into a long-term care home."

COVID-19 response causing $380,000 in operations losses per week for the city
Apr 7, 2020 8:36 PM
Comments
We welcome your feedback and encourage you to share your thoughts on this story. We ask that you be respectful of others and their points of view, refrain from personal attacks and stay on topic. To learn about our commenting policies and how we moderate, please read our Community Guidelines.