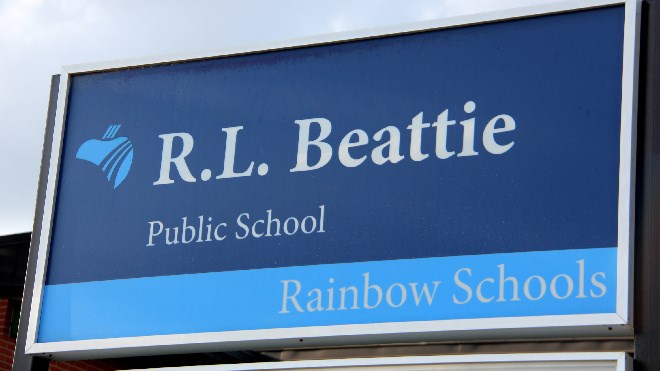 R.L. Beattie received a score of 9.6 out of 10 based on Grade 3 and Grade 6 standardized testing of reading, writing and math skills. Fill photo.
R.L. Beattie Public School got top marks in the Fraser Institute’s annual elementary school rankings report, while Marymount Academy and Lo-Ellen Park Secondary were tied as the highest rated high schools in Sudbury.

The report, which was released Sunday, ranks 3,037 public and Catholic schools, as well as a small number of private schools, based on nine factors culled from the results of provincewide tests of Grade 3 and Grade 6 students in reading, writing, and mathematics skills. High schools were evaluated according to Grade 9 test results.

Marymount and Lo-Ellen received a rating of 7.7, followed by Lockerby at 7.5 and St. Benedict at 7.4. The scores drop considerably after that, with St. Charles College getting a 5, Collége Notre Dame a 4.7, Sudbury Secondary a 4.3, Macdonald-Cartier a 4, Lasalle Secondary a 3.8 and Sacré Coeur a 2.

The lowest ranked elementary school was Queen Elizabeth II, at 0.9, followed by Lansdowne at 1.4 and St. David at 1.8.

Across Ontario, 180 elementary schools showed significant improvement in their academic performance over the past five years. In a release, Peter Cowley, Fraser Institute director of school performance studies, said the rankings are a useful tool for parents who want to know more about the school their child is attending.

The fastest improving school in the province in 2014 – based on analysis of its results during the most recent five years – is Madoc Township School located in the eastern Ontario community of Madoc. Despite one-third of its Grade 6 class having special needs, Madoc’s overall rating has steadily improved to 7.7 in 2014 from 1.2 in 2010.

“This is an important function of the Fraser Institute’s report cards: the act of publicly rating and ranking schools attracts attention, and this can provide an incentive for all those connected with a school to find ways to improve.”

Results of all 3,037 schools can be found at compareschoolrankings.org.

Visitors to the site can find out how a school has fared in the report in the last five years on any of the nine indicators of academic performance as well as the overall rating. Comparisons among schools are also easily made.