Shed fire resulted in several explosions due to chemicals stored in the structure
0
Jun 17, 2019 3:00 PM By: Matt Durnan 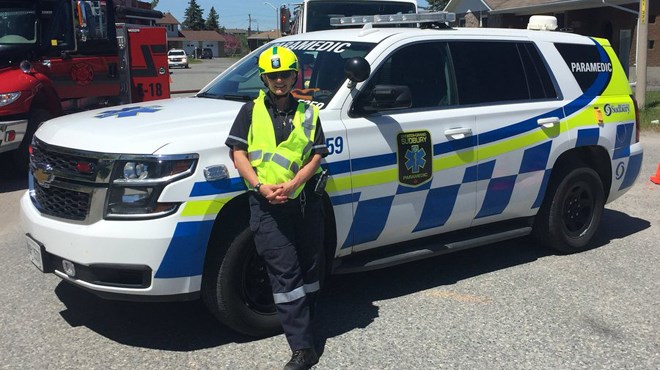 City of Greater Sudbury Paramedic Brenda Barrett-Lozier climbed through a window to get two dogs out of a home that was next to a raging shed fire on June 7. (Photo: CGS Paramedics Twitter)

City of Greater Sudbury Paramedic Brenda Barrett-Lozier didn't think twice when she spotted a pair of frantic dogs inside of a home next to a raging shed fire in Capreol last week.

On June 7, a shed caught fire at a property in Capreol and resulted in several explosions due to chemicals that were stored in the shed.

Barrett-Lozier was first to the scene as she was nearby when the call came in from Emergency Services dispatch.

"I arrived and did a scene safety, the shed was already completely engulfed in flames when I got there," said Barrett-Lozier.

"I saw that there were two English Setters in the window of the home and they seemed really frantic."

Firefighters had not yet arrived at the scene and Brenda sprang into action, knowing she needed to get the dogs out of the home.

"I noticed that the window to one of the bedrooms was open a bit. The neighbour had a ladder outside and I climbed up and into the home that way," said Barrett-Lozier.

The paramedic managed to coax the dogs towards the door by convincing them there were treats involved if they co-operated.

"The older one wanted nothing to do with me," said Barrett-Lozier. "I grabbed her collar and she just did not want to move." Eventually both dogs were escorted safely from the home and taken into the care of a neighbour while Brenda went room to room in the home calling out to see if anyone was home.

"There was a car in the driveway, so I wasn't sure if anyone was there," she said.

The dogs were unharmed in the ordeal, as smoke from the burning shed had not seeped into the home yet, but Barrett-Lozier says that the smell of burning siding was permeating into the home, as the heat from the fire was melting the side of the home closest to the blaze.

Firefighters arrived and extinguished the blaze, and the owners returned home shortly afterward, where they were greeted by Barrett-Lozier, who explained to them that their dogs were safe and sound.

"I felt so bad because I kind of ruined their screen when I went in through the window," said Brenda. "They weren't too bothered I don't think, they were just grateful to have their dogs."

Going above and beyond the call of duty isn't something that Barrett-Lozier wants to take credit for, and says that any of her fellow paramedics would have done the same thing.

"I don't think it's above and beyond, I think a lot of paramedics feel the same way because we do scene safety a lot and we're in various situations," said Barrett-Lozier.

"It was a very natural thing to happen based on the information I had and how safe I felt. I think all of my colleagues would've done the same thing, and we're just happy to bring some peace to the homeowners during a time of chaos."