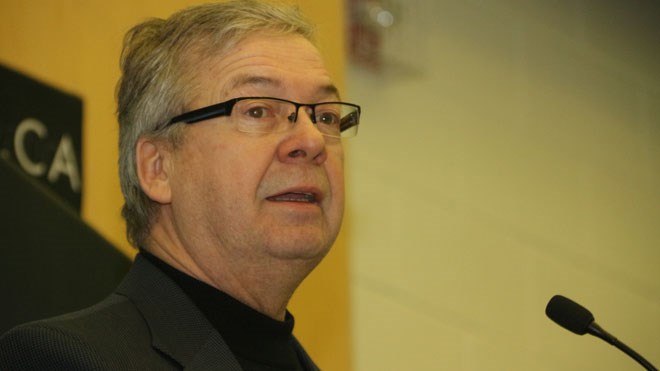 Alex Gryska, the day's first speaker, shared the story of his career with the roughly 220 students in attendance from Sudbury's three post-secondary institutions.

Gryska, the director of Ontario Mine Rescue, talked about the increasing commitment to safety in the mining industry.

“We're all committed to making mining safe,” he said. “Just the culture of mining has changed dramatically.”

After a number of deadly mining disasters in Canada, Gryska said the industry put in place necessary changes to substantially reduce job-related fatalities.

The internal responsibility system, where every worker takes personal responsibility for safety while on the job, was one such change that has made Canada's mines safer, he said.
But more still needs to be done, Gryska said, to eliminate mining-related fatalities completely.

Gryska also discussed the opportunities in the mining sector for interesting work, travel and good compensation.

“If your driver is money – but it shouldn't be – get into mining,” he said.

Trevor Eagles, manager of engineering with KGHM's Sudbury project, spoke about the first few years of his career, when he worked as a young mining engineer at the Westray Coal Mine in Nova Scotia.

“It was the best decision I ever made in my life,” he said.

Several years after the inquiry, and an intense lobbying effort by the Canadian Labour Congress, the government passed Bill C-45, often referred to as the Westray Bill, which created a new framework for corporate liability in Canada.

The Westray Bill allows for criminal charges against managers found liable of deaths in the workplace. But since it was enacted in 2003, no one has ever been charged under the law.

Other Mining Day speakers included Alicia Woods, the founder of Covergalls; Dick Destefano, the executive director of the Sudbury Area Mining Supply and Service Association; and Rob Assabgui, general manager of mines and mills with Vale.

Jeff Lafortune, a professor with Collège Boréal's School of Trades and Applied Technology, said when he was a student he never had the chance to hear from mining sector experts first-hand.

Mining Day, he said, gives students a great opportunity to network with senior people in the mining sector, and learn from their first-hand experiences.