Science North fired up over award 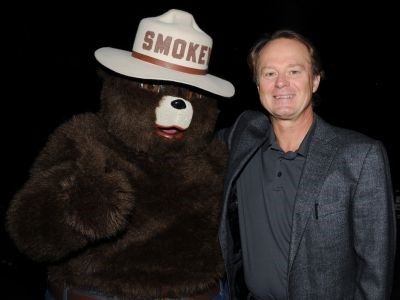 David Lickley, Science North's director of large format films, is seen in this file photo with Smokey the Bear during the launch of Wildfires! A Firefighting Adventure in 4D. Lickley, and Science North senior producer Rob Gagne, both received awards at the Northern Ontario and Film in Motions Awards. File photo.

David Lickley, Science North's director of large format films, and Rob Gagne, Science North senior producer, have been recognized with the Director's Guild of Canada's Ontario Director of the Year award for their work on Wildfires! A Firefighting Adventure in 4D.

Wildfires! A Firefighting Adventure in 4D is an immersive experience in the Vale Cavern at Science North that uses 3D film techniques combined with motion seating and special wind, water, scent and smoke effects to explore the science of fire behaviour and firefighting, according to a news release from Science North. At the centre of the film are the courageous efforts of the stars of the show - firefighters and pilots from the Ontario Ministry of Natural Resources' aviation, forest fire and emergency services section and the equipment and knowledge they use to battle this incredible force of nature.

A variation of this film in 3D, complete with special effects, has also been produced for the Canadian Bushplane Heritage Centre in Sault Ste Marie.

“David Lickley and I are extremely proud to be recognized for our work on Wildfires,” Gagne said. “This production is one of the newest attractions at Science North, and has already been seen by nearly 20,545 people since the launch in October 2011.

“Since 1996, our highly skilled staff scientists and in-house production team have been dedicated to developing quality experiences that provide visitors with an ever-changing experience when they visit Science North and Dynamic Earth. The Science North productions that are developed locally also support the broader northern tourism industry, and demonstrate Science North's ever-growing capacity to put out world-class educational and scientific content that can captivate people of all ages.”

“The fire in this film was the biggest forest fire in Ontario in nearly a decade, and the first big fire of a very active summer. Not since 1922 have forest fires claimed as much area in the province,” Lickley said. “This was a massive fire, and we were very fortunate to be able to film at very close range, the kinds of air and ground work firefighters do under extraordinary conditions. Filming Wildfires! was an amazing experience and we are honoured to win the 2012 MFM award for Ontario Director of the Year.”

Science North CEO Guy Labine said he is “extremely proud” of the creative team at Science North, as they continue to achieve some of the highest honours in the industry.

“These MFM Awards are a testament to the quality visitor experiences Science North delivers, both locally and in partnership with other organizations in the province, to benefit Northern Ontario,” Labine said.

Wildfires! A Firefighting Adventure in 4D was partially funded by the Northern Ontario Heritage Fund Corporation, in partnership with the Ontario Ministry of Natural Resources and supported by the Canada-Ontario Infrastructure Stimulus Fund.

To see the trailers for Wildfires! A Firefighting Adventure in 4D, go to sciencenorth.ca/wildfires.