Vagnini, Montepellier again call for harassment probe to be made public
Dec 19, 2017 5:00 PM By: Matt Durnan 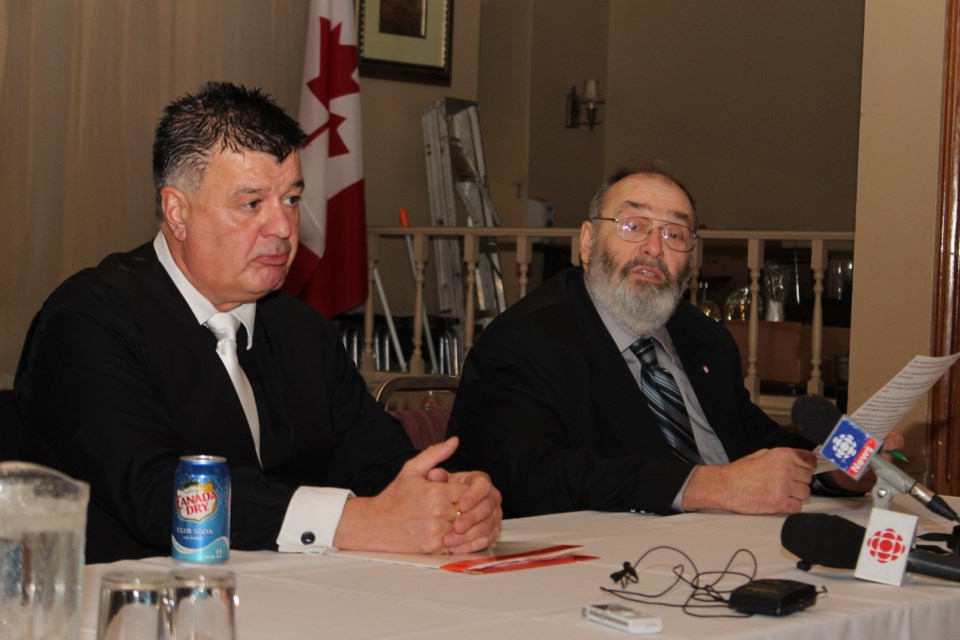 Ward 2 Coun. Michael Vagnini and Ward 3 Coun. Gerry Montpellier held a press conference Tuesday at the Copper Cliff Italian Club to speak about an investigation being carried out by a consultant hired by the city in response to harassment claims filed by Sudbury Professional Fire Fighters Association. (Matt Durnan/Sudbury.com)

Suspicion of possibly compromised Facebook and email accounts has a pair of councillors looking to put forth a motion to bring investigations into workplace harassment claims before the public.

Ward 2 Coun. Michael Vagnini and Ward 3 Coun. Gerry Montpellier held a press conference Tuesday at the Copper Cliff Italian Club to speak about an investigation being carried out by a consultant hired by the city in response to harassment claims filed by Sudbury Professional Fire Fighters Association.

In October, the Ministry of Labour directed Greater Sudbury to investigate the complaint, to keep all documents relevant to the case and to ensure training requirements are followed.

The councillors were expecting to have some answers by Dec. 15 in regards to the investigation, but rather than gaining any clarity, the situation only seems to have become more muddy, with Vagnini saying he's been mostly left in the dark.

"There's an old saying where if you want to drive somebody crazy, ignore them for 21 days and that's basically what has happened," said Vagnini.

"We haven't heard anything, we haven't had any updates to my knowledge and we're still waiting. I know there have been interviews going on and people have come forward on different things. My biggest concern is we have all this data, and this could be paranoia, but we could have all this data that's being accumulated right now and then we're going to be taken into a room at the Holiday Inn for our questioning period and the public won't have the opportunity to hear about what's going on."

Vagnini said he'd prefer to have his questioning held in council chambers and live-streamed for all to see.

For his part, Montpellier continued to hammer home points that he has already made public, clarifying that when he refers to "staff" he is speaking about two staff members who have filed the complaints, though he did not refer to them by name.

The Ward 3 councillor echoed the comments of his colleague, stating that he too felt in the dark about much of what was going on with the investigation.

"I was told by city staff management that I will be investigated by a Toronto private investigator to the tune of now up to 50,000 tax payers' dollars," said Montpellier.

"I will say he is a secret invisible investigator because he has not contacted me in any way, shape, or form. However, customers in my family-owned business have alerted me unusual personal inquiries have come up from someone who was quite evasive about their identity and reasons for inquiry. This is something I'm living with right now."

The nature of the investigation has been unsettling for Vagnini, who says that he is pushing for matters to be carried out in the public eye in the interest of openness and transparency.

"We're not employees of a company, we're public figures and the questions I ask are those of my constituents," said Vagnini, who says that there have been some peculiar happenings with his email and Facebook accounts.

"There's been funny things that have gone on with my email. I was in Toronto last week in an airport for two days with the snowstorm and it appears my Facebook was compromised. Again, it may be a little bit of paranoia, but we don't know what's going on because we haven't really been told."

Montpellier insisted that he has just been doing his job and following his mandate that he set out when he was elected to council in 2014.

"Who would have thought sticking up for your constituents, tell the truth, upset staff, get your life investigated?" said Montpellier. "I never thought of that, I have three questions that need to be answered and that's my reason for the motion."

The Ward 3 councillor is demanding to know if council will decide if the accusations will become open for all to see or remain behind closed doors, as suggested by staff.

"Did, in fact, the rank and file members of the firefighters union file the complaint of my harassing a non-union fire service manager, or is it their president overstretching his authority with no mandate from his members?" asked Montpellier.

"Did the Ministry of Labour really insist on a private investigator from Toronto and threaten council with fines and penalties if they did not comply and accept this firm? Or is this a staff suggestion, as staff had already tendered out with this Toronto firm even in advance of recommending this action to council. It appears pre-planned and suspicious in my eyes."

"The Ontario Ministry of Labour has issued orders under the Occupational Health and Safety Act (OHSA) requiring an investigation into the complaints filed with the City of Greater Sudbury. We take our responsibility under this Act seriously and we are fully complying with the orders. Not doing so would mean that the City of Greater Sudbury would be in violation of the OHSA, and subject to fines and penalties," said Bigger in his statement.

"Out of respect for all involved and the ongoing work that is necessary to comply with the Ministry’s orders, it would be inappropriate to comment further."