“It's me.” Those were the excited words uttered by 12-year-old Holly Wright when she got out of her parents' car and saw for the first time a billboard bearing her photo.
Apr 22, 2012 4:37 PM By: Arron Pickard 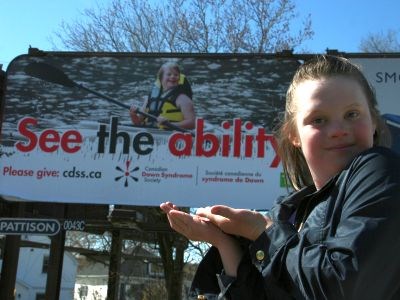 Stardom is a heavy burden to carry, but 12-year-old Holly Wright seems to be handling it well enough. She is the focal point of the Canadian Down Syndrome Society's See the Ability billboard campaign. Photo by Arron Pickard.
“It's me.”

Those were the excited words uttered by 12-year-old Holly Wright when she got out of her parents' car and saw for the first time a billboard bearing her photo. The billboard is located on Kathleen Street and features the local girl having fun during her first kayaking experience.

Holly, born with Down syndrome, is the national poster child for the Canadian Down Syndrome Society's See the Ability billboard campaign. The billboards have been put up all across the country.

The tween's reaction was “perfect,” according to her mom, Lisa Wright.

“It was classic,” she said. “She's very excited. Holly has enjoyed seeing all the photos of the billboard that have been put up on Facebook by family and friends, but it's nice to see it here in Sudbury.”

The larger-than-life poster wasn't even supposed to come to Sudbury, Lisa said. She had to call the Pattison Sign Group, which is a sponsor of the billboard campaign along with TD Bank, to see if it was possible to have the sign put up in the city.

Lisa said she's hoping it will be put up in a more high-traffic area at that point, but was more than satisfied with the location of the sign right now. It was supposed to be put up on April 19 or 20, but inclement weather and 15-25 cm of snow put a damper on those plans.

On April 21, Holly's family gathered at the Kathleen Street location to share in the moment. The obviously excited young girl posed for photographs and jumped and danced around while her family and friends celebrated the occasion.

“We're happy she has had the opportunity to finally see the sign in person,” Lisa said.