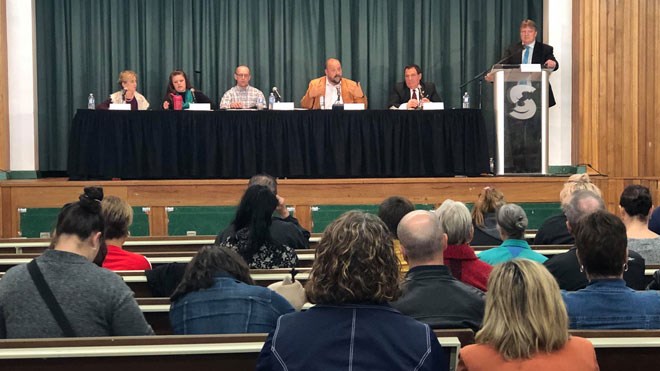 Five candidates took to the stage to debate at Confederation Secondary School in Val Caron on Thursday evening, but it was a much busier night for two of them.

Perhaps not surprising in a riding where the MP has always been a Liberal or New Democrat, Grit Marc Serré and NDP Stef Paquette took the lion's share of audience questions at the Greater Sudbury Chamber of Commerce sponsored event.

They were joined by Conservative Aino Laamanen, Green Casey Lalonde and PPC Mikko Paavolo for a 2.5-hour debate that focused on business issues and was carried live on Sudbury.com.

A classic bellwether riding, the winner in Nickel Belt is often a sign of who forms the government. Since 1968, Nickel Belt residents have almost always voted Liberal when the Grits win a majority, and voted NDP when the Conservatives form the government. The exception was from 1974-1979, when John Rodriguez held the seat when Pierre Trudeau reclaimed a majority government for the Liberals.

Rodriguez defeated Gaeten Serré, Marc's uncle, to win the riding for his first time way back in 1972.

With so much history, and a struggling Liberal national campaign, Paquette and Serré had the other in their sights much of the night.

"What you see is what you get," Paquette said, describing himself as an authentic person who will fight for ordinary people in Parliament.

On the environment, Paquette said the Liberals are moving too slow to get the nation to a zero-carbon state.

"Canada is warming up twice as fast as any other government in the world," he said. "We need to put more zero emission vehicles on the road."

But people have to be protected, adding he knows of a business that is closing because of high hydro costs. He said ordinary Canadians pay far more of the tax bill than corporations, and handouts to rich corporations have to stop.

"The tax gap is huge," he said. "We have to stop giving breaks to the rich."

But Serré pointed out that NDP candidates in Algoma-Manitoulin-Kapuskasing and the Sault this week supported a $40-million bailout for Huron Central, when the U.S.-based company said it would end rail service between the Sault and Sudbury because the cost of upgrading the rail line didn't make sense economically.

Ontario Northland is a better option, he said.

“Your party's press release yesterday supported a subsidy for a U.S. company for $40 million,” he said. “I think we have a better solution than that.”

“You can talk to Carol Hughes in Algoma-Manitoulin-Kapuskasing who made the announcement,” Paquette said. 'I've got her right now on speed dial.”

“Well, I'm not the one who made the announcement. I'm not going to talk for Carol Hughes.”

In response to a question of how he would represent the riding when he's not in government, Paquette replied "by standing up and talking."

He said MPs like Charlie Angus – and Nickel Belt MPP France Gélinas – have done outstanding work in getting their riding's voices heard.

Paquette then listed how many times Angus and other MPs spoke in Parliament, with Serré coming in on the low end.

"France is Sudbury's greatest politician,” Paquette said, and she's in opposition. “I hope to be elected and maybe give her a challenge to that award."

"Talk is easy,” Serré replied. “The NDP talk a lot, but what results has Mr. Angus shown?

"The key here is listening. I've been doing that, and getting results for the riding. That's what people expect, to bring dollars to the riding. The NDP can't do that."

As for the other candidates, Lalonde focused on the urgent need to clean up the environment, as the climate change crisis isn't going to just go away. The solution is not just cleaner energy, but finding ways to use less.

"Conservation needs to be a part of this conversation," she said.

The Greens are promising to cut carbon emissions by 60 per cent through initiatives such as a national electricity grid, retrofitting homes and encouraging consumption of local goods, rather than importing everything.

Laamanen said she supported her party's plan to end the carbon tax, and said progress on protecting the environment could be made through education and tighter emissions rules.

"I personally, totally will support green energy, and better prices for our energy," she said. "We need to do this from the bottom up."

She praised young people taking part in the Fridays for Future marches, and suggested the national broadcaster play a bigger role in educating people on the environment.

"CBC would be a perfect vehicle to show us how to conserve and use less energy," Laamanen said.

Paavolo focused his comments on the dangers of the United Nations taking away “our freedom,” vowing a PPC government would end all spending on foreign aid and withdraw from international environment treaties.

"We believe in taking care of Canadian issues first,” he said. "If we were not funding the rest of the world, we would have a lot more money."