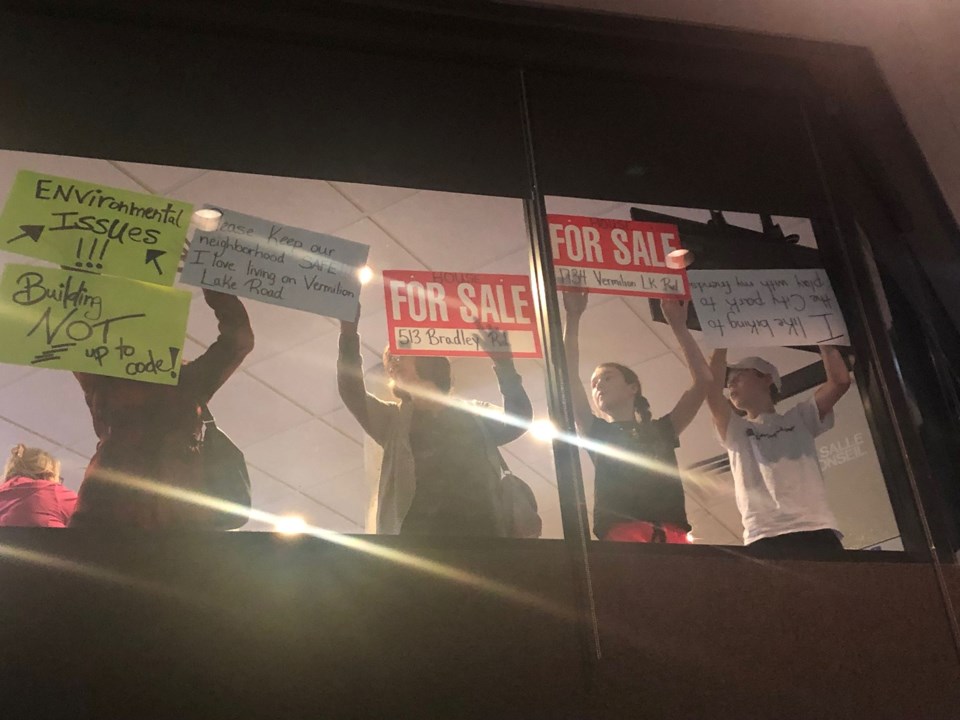 Protesters at city council on Tuesday held up protest signs against the glass outside council chambers after the Teen Challenge rehab centre was approved for Vermillion Lake Road. (Darren MacDonald/Sudbury.com)

Holding placards opposing the Teen Challenge facility, along with mock “for sale” signs for their homes, the crowd of more than 100 was ready show their displeasure with the planning committee, which unanimously approved the rezoning required for the project to go ahead on Sept. 10.

All committee decisions have to be confirmed by city council before they become official. But if the crowd was expecting the approval to be decision to be reversed, they were quickly disappointed.

And as the meeting opened, Mayor Brian Bigger told them signs and shouting were not allowed at council meetings.

Approval of motions passed by committees are usually dealt with early in meetings, and Ward 3 Coun. Gerry Montpellier asked for the Teen Challenge motion to be pulled for a separate discussion.

The 16-bed centre on Vermillion Lake Road, located near the community of Dowling, would include 12 clients living there for a year, and another four who are graduates of the year-long drug and alcohol recovery program. It's a voluntary program and participants must be stable and pass a vetting process before being accepted into the 12-month program.

In opposing the rezoning, Montpellier said several times the area was “not a suitable location” for the facility. The city has received dozens of letters from residents opposing the centre, he said, along with 180 people who signed a petition to stop it, out of 200 homes in the area.

“The message was quite clear — this is not a suitable location,” Montpellier said.

The only support was from people who live far away from the area who wouldn't have to live next to a “drug rehab centre,” he said, adding that residents just want to keep living in their “country paradise.”

Ward 10 Coun. Fern Cormier, who chairs the planning committee, said the province's human rights commission and court decisions have made it clear cities can't “people zone,” the term for denying planning applications because of who will use the land.

And just saying a project is not suitable isn't a planning argument.

“To put it plainly, saying something is in the wrong location is valid, but subjective,” Cormier said.

Rezonings can be appealed under Ontario laws, he said, but city council has to follow planning rules, which don't allow them to deny developments based on the people who will live there.

In response to a question, planning director Jason Ferrigan said Teen Challenge will have to erect a 1.5 high opaque fence around the property to give neighbours some separation. But the application conforms to local and provincial rules.

“In (staff’s) professional opinion, it is appropriate in this location,” Ferrigan said.

And Ward 4 Coun. Geoff McCausland said Teen Challenge has a strong track record, with a strong vetting process that has operated for decades without an incident.

“We can’t assume these people are criminals,” McCausland said. “We must not discriminate.”

The rezoning passed by a 11-2 vote, with only Montpellier and Ward 2 Coun. Michael Vagnini voting now.

“What a joke!” some protesters shouted as they quickly left council chambers. “Are you going to buy my house?”

For several minutes afterwards, some held up the banned protest signs against the glass outside council chambers, before leaving Tom Davies Square.