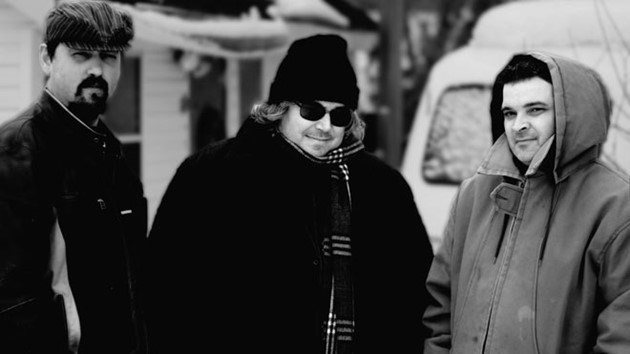 The Puckhogs — aka Sean Barrette, Chris Leblanc and Brent Wohlberg — have finally released an album. (Supplied)

Three local songwriters – Sean Barrette, Chris Leblanc, and Brent Wohlberg – collectively known as The Puckhogs, joined forces in the fall of 2013 and entered their song, “For the Love of the Game,” in the CBC Hockey Night in Canada Song Quest to find the Next Great Canadian Hockey Song.

Their underdog run to first runners up (second place) out of more than 1,000 Canadian artists in their words “surprised the s*** out of everyone,” especially them.

But they managed to make the most out of the support they’d received from their fellow Canadians and donated all proceeds from sales of the song at their Bandcamp site – more than $2,000 - to The Human League of Sudbury, to help underprivileged kids get into organized sports.

So, what to do next with all that fame and fortune?

“Clearly they had no idea, as it took them over five years to finally put together a full album, which they should have called Strike While the Iron’s Hot (because irony, eh?), but didn’t,” said a press release.

The 10-song debut, recorded by Wohlberg at his Artifact Media studios and imaginatively titled The Puckhogs, was released today to their long-suffering fans.

Best described as Canadiana, or “music about your camp to listen to at camp,” the songs are lively, authentic, sincere, and often humourous glimpses of what it means to live in the north.

And yes, of course the hockey song is on there.

The Puckhogs is available as a CD and on all digital platforms. Visit their website at www.thepuckhogs.com to buy the disc. You can also check out their Facebook page here.

Expect to pay 121.9 at the pumps in Sudbury today
Feb 20, 2020 7:32 AM
Comments
We welcome your feedback and encourage you to share your thoughts on this story. We ask that you be respectful of others and their points of view, refrain from personal attacks and stay on topic. To learn about our commenting policies and how we moderate, please read our Community Guidelines.