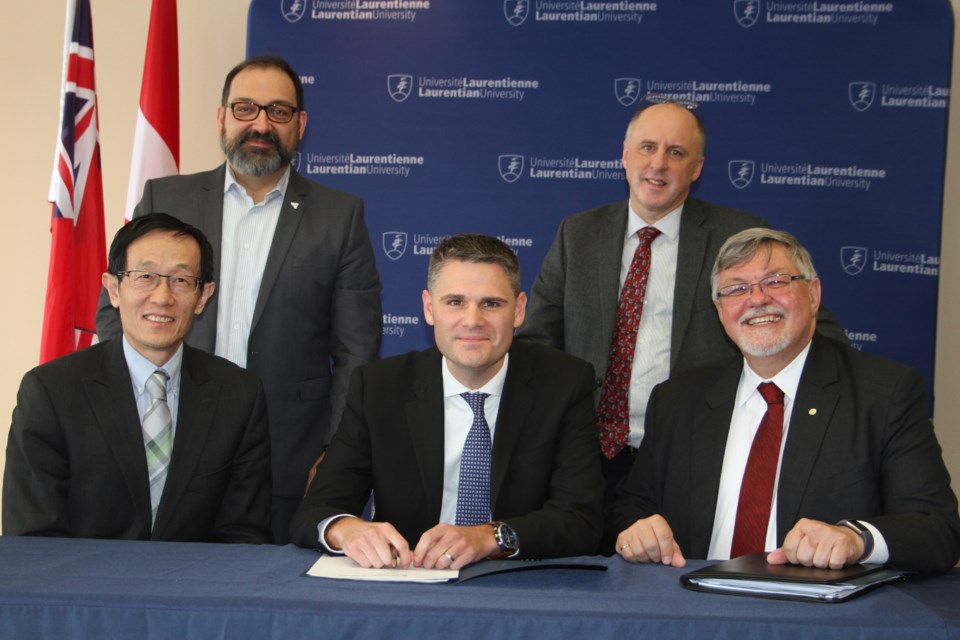 In the back row, Glenn Thibeault, MPP for Sudbury and energy minister, left, and Pierre Zundel, interim president and vice-chancellor of Laurentian University. In the front row, from left, Dr. Rui Wang, vice-president of research at the university, James Scongack, vice-president of corporate affairs and environment at Bruce Power, and Vic Pakalnis, president and CEO of MIRARCO Mining Innovation, signed a memorandum of understanding to form a research group to create an industrial chair position at MIRARCO to study small modular reactors and their applications in mining, remote communities and health effects of low-level radiation exposure.

The first step toward having feasible nuclear power for remote Northern communities and mines has been made with an agreement.

Representatives from Bruce Power, MIRARCO Mining Innovation and Laurentian University met at the Sudbury university on April 6 to announce they have signed a memorandum of understanding (MOU) to research the feasibility of small modular reactors (SMRs) as a sustainable, clean and safe power source for communities that still rely on diesel fuel generators for their power needs.

The five-year, $1-million research agreement will create an industrial chair position at MIRARCO, which will help highlight clean energy solution opportunities in the province's North.

The MOU will also help mining companies study the feasibility of using SMRs as a power source for remote mine projects, as well as study the long-term effects of low-level radiation exposure and possible production of medical isotopes.

“This is not just an important announcement for the mining sector, but for the planet,” said Vic Pakalnis, president and CEO of MIRARCO Mining Innovation and the associate vice-president of Laurentian Mining and Technology.

He was quick to highlight the environmental and economic impact this group would have. In remote First Nation communities, many still rely on diesel generators that cost around 32 cents kilowatt per hour to run. It goes beyond Ontario's borders, into the communities and mining projects in the Arctic.

This research group, Pakalnis said, would see if it is possible to produce and run small nuclear reactors, how effective and clean will they be, and Canada's reputation for clean, safe nuclear power would be taking a lead role in the research.

Pakalnis said MIRARCO's area of study is industrial applications of the SMRs because it will be a way for companies to generate their own power without needing to tie into the existing grid, or rely on diesel, which is why they created the chair.

“Once you get it in the mining industry, and they can be conservative, others will see if the mines are buying into it the rest of the world will go to other applications,” he said.

James Scongack, vice-president of corporate affairs and environment at Bruce Power, said the company is looking at a long-term program of study on both fronts to see how reactor technology can be put in smaller applications.

Currently, nuclear provides 60 per cent of Ontario's power, but at three large stations: Bruce, Pickering and Darlington. They are looking at ways for nuclear reactors where a large station is not needed.

The concept is to look at ways to establish a nuclear power supply close to where it is needed, like a mine site, without running transmission infrastructure.

The units are not considered mobile, only smaller versions of existing reactor stations. The big reactors generate around 1,000 megawatts, but what Bruce Power is looking at are around five to 150 megawatts.

Doug Boreham, division chair for Northern Ontario School of Medicine and the Bruce Power chair for Radiation and Health, said the partnership with Bruce Power and the medical school started in 2012. He said Bruce Power is keen on using isotopes to treat diseases. This memorandum will further that.

He said the fear of radioactive material and the damage it can do to health and environment is still prevalent in the public mind. The school is hoping to perform more tests to show how nuclear power can be used safely, and still produce life-saving low-level radiation medical material without doing harm.

“In reality, if you look at the number of diagnostic procedures that are done in North America, it's around 60 million CAT scans a year alone,” Boreham said. “That radiation does have an effect on people, and Bruce Power is investing in studying what those low doses are, and reassuring the public they are safe.”

The school had received $5 million over five years before this memorandum to study this.

Boreham said the school can use this memorandum and funding to find researchers around the country to study this subject at the medical school.

Pakalnis said the partnership with Bruce Power started in 2015. They were already working on a related project, and kept talking about the memorandum of understanding. Due to the mining supercluster in Sudbury being shortlisted for funding consideration by the federal government, they formed a consortium led by Bruce Power, which included Ontario Power Generation and the Canadian Nuclear Laboratory, as well as five mining companies.

“The Northern supercluster didn't get chosen, but that coalition stuck,” he said. “Part of what's going to be happening in the future is a result of the work we've done since 2015-'16.”

So far there are 10 designs for the SMRs, which include one from Sweden, one from Westinghouse Electric Corp., and four Canadian concepts. All of them will be prototyped and tested at Chalk River starting this fall.

The Canadian Nuclear Laboratory is soliciting submissions through a request for proposals, which will be prototyped. Pakalnis said once the prototypes are approved, they will be tested in the field.