Sudbury’s indoor soccer teams will have to play in the gym this season because the multi-million dollar soccer dome slated to open this fall at St. Charles College won’t open until next year. Ward 8 Coun.
Oct 29, 2012 3:56 PM By: Darren MacDonald 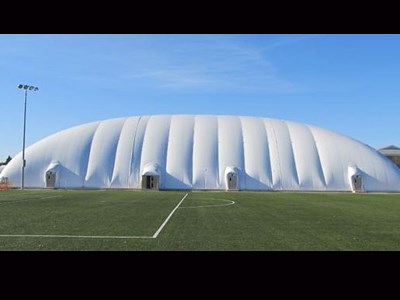 A multi-sports dome, similar to what is in King City, Ontario, on the grounds of the Country Day School, is slated for Sudbury, but the project has been postponed until 2013. Supplied photo.
Sudbury’s indoor soccer teams will have to play in the gym this season because the multi-million dollar soccer dome slated to open this fall at St. Charles College won’t open until next year.

Ward 8 Coun. Fabio Belli, who has pushed for the project and worked with the developer, The Farely Group, to get the dome built, said technical snags stalled construction.

“There’s been a few delays,” Belli said. “My understanding is they have hired a code consultant.”

Code consultants are experts who ensure new structures meet local and provincial building codes. Belli said there were things the city was asking for from the developer, which ended up delaying the start of construction.

“There were some issues with water, but that’s been resolved,” he said. “There’s still some back and forth going on between (Farely) and the city in as far as requests from the city for what they were looking for.

“Things are moving forward. They are expecting to be up and running next year for sure … There just wasn’t enough time this year to get everything done.”

The Farely Group, a Guelph-based company that has built several similar domes in Canada and the U.S., didn’t return calls from Northern Life seeking comment. But Belli said the company has several projects going on at the same time, which may have factored into the delay in Sudbury.

“My understanding is there were a few things the city requested from the developer, and the developer has a lot of projects on the go at the same time,” he said. “I think he was trying to fit (Sudbury’s dome) in, but there just wasn't enough time. Now he’s just trying to gather up all his information and he’ll be ready to rock (next year).”

The dome, measuring 200 feet by 300 feet, will be located on one of the soccer fields at St. Charles College. The bubble will cover the majority of that field. Inside will be four mini soccer fields, measuring 80 feet by 180 feet, along with change rooms, a clubhouse and a four-lane walking track.

In addition to soccer, the domed field can be used for other sports, such as baseball, indoor golf, lacrosse and endurance training.

When it was announced in April, the developer was so certain it would be complete by the fall, the Sudbury Indoor Soccer Club allowed its lease at its old indoor facility on Falconbridge Road to expire. The city has since removed the artificial turf, which means the club will have to play its games in a gym this year.

In a message on the group’s website dated Sept. 30, club president Lloyd Rebeiro explained the situation to members.

“With a project of that magnitude, some snags were hit, and the project could not start until all required permits were obtained from the City of Greater Sudbury,” Rebeiro wrote. “It was not until last week that we were advised that the permits will probably not be obtained until the end of this year, and so bubble construction cannot start until next spring 2013.”

The delay is forcing the club to “go back to its roots for one year,” Rebeiro wrote.

“We will have to revise the playing rules and regulations due to the limitations of the facility ... Only officials, players and coaches will be allowed on the playing surface. All spectators will have to watch from the balconies above.”

Belli said that while the indoor soccer league will have to play on concrete floors this year, it will be worth it in the long run.

“Come next year, they’ll be back … in a beautiful facility that will be able to accommodate the 2,000-3,000 kids and adults that play the sport,” he said.

Once construction begins, it will take two to three months to finish the bubble at an estimated cost of $2 million or $3 million. And there’s still time to sign up for indoor soccer this year. Go to sccsudburyindoorsoccerclub.com for more information.