Some anger, but little resistance to one-bag limit 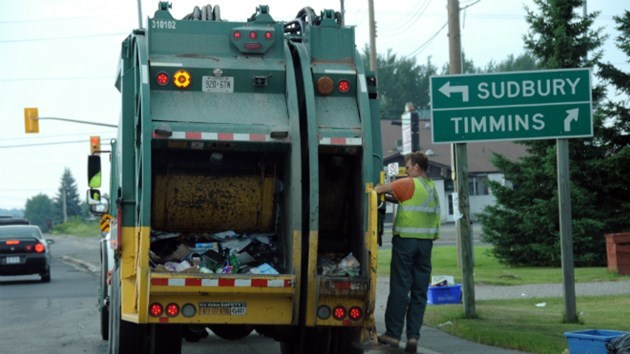 Count New Sudbury resident Ray Loiselle among those who are not impressed with the one bag per week limit Greater Sudbury has imposed on weekly garbage collection.

“You know, with the high taxes we pay, they're just putting this garbage problem on the people – and the people know it,” Loiselle said.

With three people in his household, he says they are struggling to get below the limit. Worse, he didn't receive the 10 free bag tags mailed to residents ahead of the new limits coming into effect Oct. 1.

When he called 311 to find out where they were, he was told they were sent in a mass mailout over the last few months. Why, Loiselle wondered, wouldn't they send them to each homeowner.

“Otherwise, they could be scooped very easily,” he said. “How hard could it be to do a mailout with proper address is on it? They'd never send you your tax bill that way.

“And what happens with a family of five people? There's no way they can reduce that to one bag, I don't care what anybody says.”

Renee Brownlee, the city's manager of collection and recycling, said Thursday the city received 269 calls on Oct. 1, some of whom had complaints and questions similar to Loiselle.

“But the majority of those calls were requests for green carts and blue boxes,” Brownlee said.

As they have said many times, the goal of the new bag limits is to increase the amount of waste that goes into recycling and composting, diverting it away from the landfill.

With the cost of a new landfill running between $40 million-$50 million, it's in everyone's interest to extend the life of municipal dumps as long as possible.

“You can still put (all of your waste) out at the curb. You've just got to be a little bit more diligent now in sorting your waste.”

Since June, when the city kicked preparations for the new limits into high gear, demand for green carts and blue boxes has soared.

“We sent out 4,839 detailed information packages requested from residents who just wanted more information on what's recyclable, what goes in the green cart, that kind of thing.

“We also had 3,093 downloads of our Waste Wise Greater Sudbury app.”

The app, which can be found here, (https://www.greatersudbury.ca/live/garbage-and-recycling/waste-wizard-waste-wise-app/ ) outlines what can and can be recycled or composted, and what has to go into the garbage.

As far as people with special circumstances who produce more garbage than most – for example families with young children or medical concerns – Brownlee said 440 homes have been registered in a program that ensures they can exceed the limits at no extra cost. Information on those programs can be found here.

They have received complaints about people not getting the free bag tags, Brownlee said, but most complaints have been addressed. About 75,000 packages have been mailed out as a way to ease some households to the new limits.

“This was never about the bag tags,” she said. “The complimentary tags were sent out to residents as something that they could use to help them through their transition. 'Oops, I forgot it's one bag limit has started so I'll catch up next week,' or for the occasion where you might have an extra bag from time to time.”

While it's too early to tell, Brownlee said they have done observations on some of the garbage routes, and it appears green cart usage has increased.

“So that's really positive,” she said. “People have been gearing up for this. The blue box is the norm now for most people, and we want to get to the point where the green cart is the norm.

“We'll do another participation study next year and then we'll be able to give some good solid numbers on that.”

They will also look at the tonnage going into landfills to see if it has dropped, and continue random searches of discarded trash to see how much could have been diverted to compost or recycling.

“Right now – and we're only a couple of days in — it seems to have gone quite smoothly so far. We're not getting a lot of people non-compliant — the average is under one per cent of people are over the limit of the one bag limit.”

And, she said, they are advertising the change as a one-bag limit, but residents don't have to use a garbage bag. An approved trash can is fine, as long as the garbage isn't more than 40 pounds.

“You can put two black garbage bags in there, you can put a bunch of little kitchen bags or shopping bags or grocery bags,” she said. “You can put it loose in there if you want. You don't even have to use a bag if you're using a container, but you need to make sure that it's under 40 pounds.”