Something fishy with the Junction Creek Festival

A number of families and their children released around 1,000 brook trout into Junction Creek Saturday. The trout release was the main event at the Junction Creek Festival at the Twin Forks Playground in New Sudbury.
May 23, 2015 9:32 PM By: Jonathan Migneault 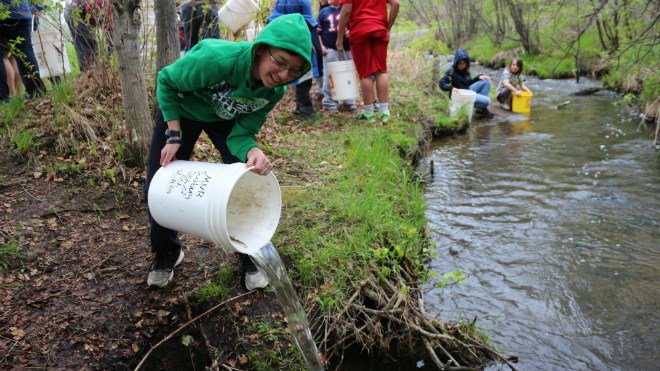 The trout release was the main event at the Junction Creek Festival at the Twin Forks Playground in New Sudbury.

The Junction Creek Stewardship Committee has organized the event since 2000 to help rehabilitate the creek, which runs through a large portion of Greater Sudbury.

“The water quality in Junction Creek has improved so much that it is hospitable again to trout,” said Sarah Woods, the co-ordinator for the Junction Creek Festival.

Brook trout were historically an important species in the creek, she said, but died off due to industrialization in the region.

More recently, the Ministry of Natural Resources has been reintroducing the species to the creek thanks to a hatchery in North Bay.

Woods said the trout are a top predator in Junction Creek.

“If we want to reestablish a healthy ecosystem, then top predators are definitely important,” she said.

But the fish have not yet been reproducing on their own, which is why they have been reintroduced every year.

Andrew Hatch, who works at the Ministry of Natural Resources' fish hatchery in North Bay, and was handing out buckets of brook trout to families Saturday, said the fish should be able to reproduce under the right conditions – including clean water chemistry.

The brook trout released into the creek were between 12 and 14 months old, and weighed 17 grams on average.

The species can live anywhere from six to 12 years – depending on water conditions.

The festival also featured a number of games for children – including a challenge to identify different insects that live in the creek.

People also had the chance to plant a variety of different trees near the creek, and see a number of different turtle species native to Junction Creek.

One turtle on display was a Blanding's turtle. The species, which is on Ontario's threatened species at risk list, was only discovered in the creek in 2011.

There are now at least 24 Blanding's turtles known to reside in Junction Creek.