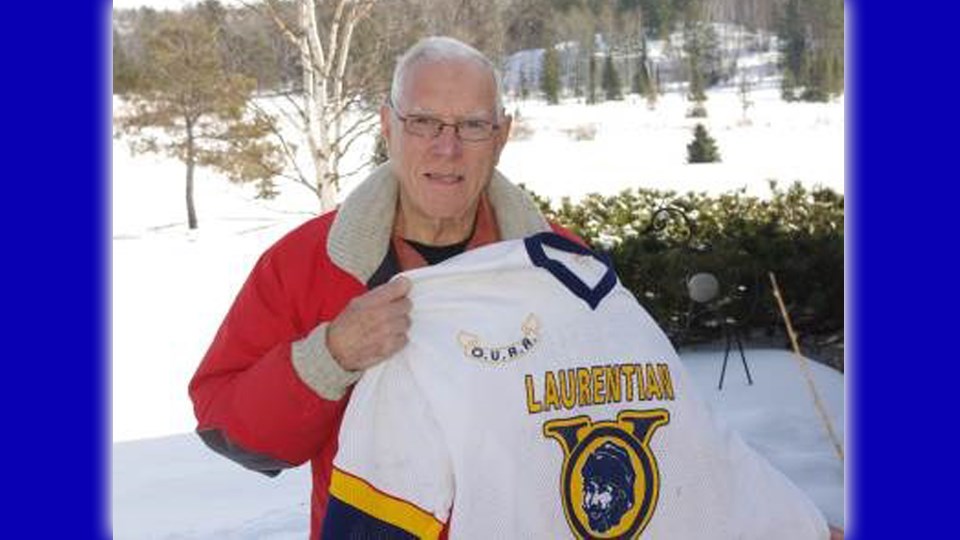 Jack Porter, guided the Laurentian Voyageurs’ hockey team for more than a decade when the team was first formed in the 1960s, died Feb. 25 at the age of 86. (File)

Sudbury Kinsmen Sports Hall of Famer Jack Porter has died. He was 86.

Porter died peacefully on Feb. 25 at Health Sciences North, surrounded by his family, according to his obituary.

Few names are as synonymous with the early success of the Voyageurs as coach Jack Porter, the man who guided the team for more than a decade in the formative years of the 1960s.

Born in Sudbury, the only boy in a family of six children, Porter and his siblings were constantly involved athletically, enjoying seasonal pursuits at Bell Park — hockey in the winter, paddling in the summer — among a host of other activities.

A graduate of both Alexander Public School and Sudbury High School, Porter earned a hockey scholarship to Clarkson University, capturing an NCAA championship during his years in upstate New York and eventually named to the school's Hall of Fame.

Returning home to pursue a career in education, Porter's arrival coincided with the founding of Laurentian University and the launch of the men's hockey team not long thereafter.

In 1964, LU joined the Ontario Intercollegiate Athletic Association (OIAA), laying the foundation for a championship run that would see the Voyageurs capture the OIAA title in six of the next seven years.

Porter was selected to join Team Canada for a three-week excursion to Russia in 1969, meeting with numerous hockey counterparts half a world away.

Leaving the university ranks in the 1970s, Porter returned to youth hockey, working alongside his sons and other youngsters in a practice-first-oriented setting.

Blessed with five children, Jack and Mary Catherine, his wife of more than 50 years who passed away in 2018, shared sporting passions well beyond hockey, combining tournament treks to Lake Placid with the opportunity to take in some alpine skiing on the slopes.

Porter is a member of both the Sudbury Kinsmen Sports Hall of Fame, as well as the Laurentian Varsity Athletics Hall of Fame.

Memorial Visitation in the Jackson and Barnard Funeral Home 233 Larch Street, Sudbury Saturday, Feb. 29, from 1:30 p.m. to 9 p.m. only. Cremation at the Park Lawn Crematorium. In lieu of flowers, donations to House of Kin would be appreciated. For donations and messages of condolence, www.lougheed.org.

-With files from Randy Pascal