Theatre company was close to not being able to continue with its season
Oct 18, 2017 5:00 PM By: Heidi Ulrichsen 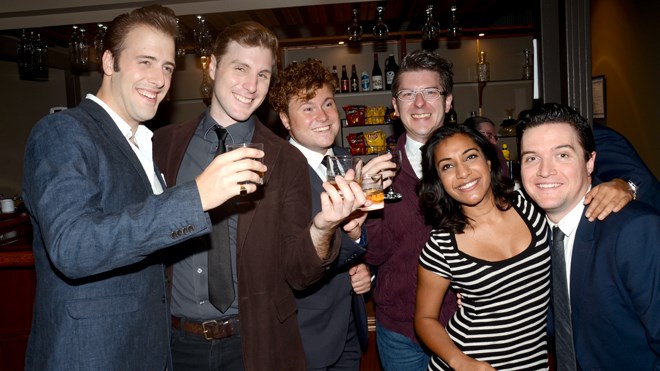 Performers with Sudbury Theatre Centre's recent production of “Million Dollar Quartet” pose for a photo after a show. STC has been struggling financially, but the City of Greater Sudbury is providing the theatre with a $200,000 bailout. (File)

The president of Sudbury Theatre Centre's board of directors said he had tears in his eyes after learning city councillors had voted Tuesday to throw the struggling theatre a $200,000 lifeline.

Gerry Copeman said the board was optimistic that the city would help out — this is the first time in its 46-year history STC has asked for a bailout — but is still “very touched” that they did.

“We just came to the point where we were saying 'It's either this or we're going to have to consider the fact that we're not going to be able to put on further productions,'” he said.

The city's professional English-language professional theatre company, it was revealed in June, is about $400,000 in debt due to a string of losses over the past three seasons.

STC is now working with a consultant specializing in theatre companies' finances to develop a financial recovery plan, and the Greater Sudbury Development Corporation is paying for this consultant.

Ward 10 Coun. Fern Cormier said the STC believed it had more time to meet certain creditors' demands. However, those creditors are demanding payment by Nov. 1, putting the theatre's future in jeopardy.

“Their situation, as has been expressed publicly, is dire,” Cormier said Tuesday night. “For the first time they are seeking assistance of this magnitude.”

One of the creditors STC had to pay immediately was its audit company. Copeman said in order to apply for funding from higher levels of government, STC needs a professional audit of its finances.

But before that happens, it has to pay for last year's audit. “Rightfully so,” he said. “Obviously people need to be paid.”

When asked what STC's finances are like after the bailout, Copeman said the majority of the theatre's debt — about $150,000 — is a mortgage that can be paid down on a monthly basis.

But it's still crucial to sell tickets and fundraise, he said.

“'Million Dollar Quartet' that we just put on just brought in $88,000 in ticket sales,” Copeman said.

“It was a marvellous, marvellous thing. The next is the Christmas production that's coming up. Now we're able to put it on. If we hadn't received the money, we wouldn't have had the monies to begin the rehearsals and whatnot.

“But now that we do, we'll be putting on a Christmas show. I'm sure it's going to bring in the same kind of response from the community. We're optimistic that the energy is there.”

English-language amateur theatre company Theatre Cambrian has its own troubles, with the Canada Revenue Agency even seizing the money in its bank account over the summer.