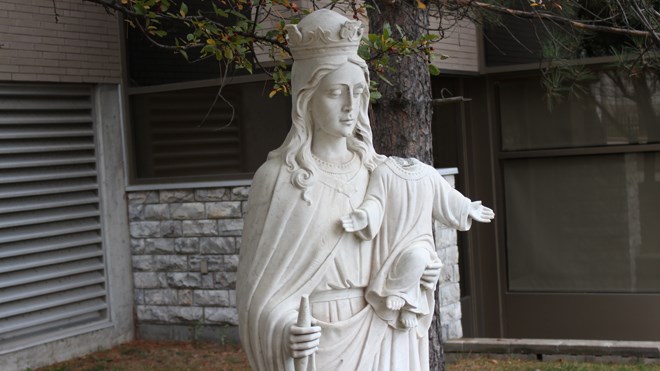 Photos and stories of this statue at Ste. Anne des Pins have been circulating the web and news outlets this week. Photo: Matt Durnan

What started out as a small local story has snowballed to viral status and has reached across the country and overseas.

When Father Gérard Lajeunesse of Ste. Anne des Pins brought in Heather Wise to begin the restoration of a statue of Mary and baby Jesus that had been vandalized, he never expected the attention it's been getting.

"The last two days have been crazy," said Lajeunesse. "My phone has been ringing and I've been doing nothing but speaking to media. CNN, the Guardian, yes that Guardian, the one in London. It's hard to imagine that such a local story has gone around the world."

Photos of the restored statue made the rounds on social media and popped up on a number of news websites around North America, and in the wake of the media-frenzy that has been created, the church and statue have become somewhat of a tourist attraction.

Lajeunesse removed the replacement head on Oct. 21, but not necessarily in response to the whirlwind of attention.

The statue was in fact at risk of further damage because of the clay material that was used to shape the replacement head on baby Jesus.

"I noticed that the clay was eroding from the rain so I had a restoration person come in and look at it and their suggestion was to remove the head," said Lajeunesse.

"What I don't think many people knew was that the first head was never going to be the final product, it was only temporary, it turned out that it was going to be a lot more temporary than I had originally thought."

If the head had not been removed, there would have been a risk of damaging the statue beyond repair.

"Had I known what the clay was going to do I would have removed the head much earlier," said Lajeunesse.

The parish's priest says that the way this story has taken off is a bit surreal, but he is also surprised that the statue was not vandalized again.

"It's hard to miss it with the difference in colour," he said.

While the statue remained untouched, the church and sculptor haven't been immune to the barbs from the online world.

"Some people have been pretty harsh," said Lajeunesse. "I've tried to reach out to Heather to let her know that I would be removing the temporary head but I haven't been able to get in touch with her yet."

While Lajeunesse says that he believes things have been blown out of proportion, he assumes some responsibility for the story reaching the magnitude it has.

"I can assume some of the responsibility, there was definitely some initial shock factor with the statue when the temporary head was put on," he said.

"I should have let people know beforehand that this wasn't going to be permanent. I definitely give kudos to Heather for stepping up and doing this for us and I hope she's involved with the new one."

Even if Wise opts out of the statue's restoration, some silver lining from the story spreading as fast and wide as it has, is that it has drawn interest from other sculptors to take part in the project.

Three sculptors from Ontario, including one from Sudbury have approached Lajeunesse to help, as well as one from Kansas City.

"I'm sure that in the end, something good will come from all of this," said Lajeunesse. "Who knows, there could be another frenzy once the new head is on, but we're going to take the time to get it completed and have it done well."

We the Bury bottle drive will support families of children with cancer
Jul 2, 2020 5:00 PM
Comments
We welcome your feedback and encourage you to share your thoughts. We ask that you be respectful of others and their points of view, refrain from personal attacks and stay on topic. To learn about our commenting policies and how we moderate, please read our Community Guidelines.