Still hope for horseracing in 2013

While there’s still no deal in place with the province, the owner of Sudbury Downs said there’s still time to save the 2013 horse racing season in Sudbury.
Mar 11, 2013 4:43 PM By: Darren MacDonald 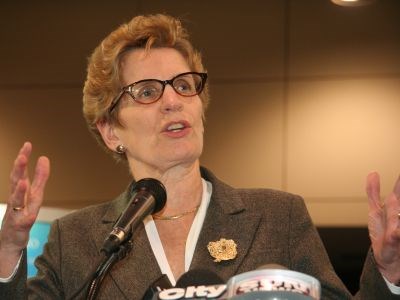 Premier Kathleen Wynne, seen in this file photo at the Prospectors and Developers Association of Canada conference, announced last week her government had signed agreements with four more tracks in the province, bringing the total to six. File photo.
While there’s still no deal in place with the province, the owner of Sudbury Downs said there’s still time to save the 2013 horse racing season in Sudbury.

Pat MacIsaac said March 8 talks are still ongoing with the province for transitional funding that would allow racing to continue at the track. The province has set aside $30 million for racetracks in 2013 to support racing, and has already signed agreements with six Ontario tracks.

“There’s been some indication that (Premier Kathleen Wynne) has made some positive announcements,” MacIsaac said. “But I haven’t heard them or read them or seen them.”

Wynne announced March 8 her government had signed agreements with four more tracks in the province, bringing the total to six. Details aren’t being made public, but the province has said it’s looking to ink three-year deals to help tracks continue operating as a previous agreement expires this month.

Under the old deal, tracks split revenue from gambling with the province and municipalities. However, last spring, the Ontario Lottery and Gaming Corp. announced an end to those agreements in favour of building full-fledged casinos in each of the dozens of gaming zones in the province, including five in Northern Ontario.

The loss of revenue meant an end to racing at most tracks, prompting talks on transitional funding to give the industry new life.

The government aims to “complete agreements with interested race tracks in the coming weeks to provide transition funding for the next three years in order to ensure horse racing in the province,” said a March 8 release from the Ministry of Agriculture and Food.

“We’ve already made great progress with an agreement-in-principle with the province’s largest horse-racing organization so that racing continues at Woodbine and Mohawk,” Wynne, who is also the minister of Agriculture, said in the release.

“We continue to work on transition funding agreements with other tracks while we work with the sector on a new market-driven model that works for the industry and is good public policy.”

Longer term, the province aims to “integrate horse racing with the provincial gaming strategy to ensure future revenue streams for the industry.”

“There is a genuine willingness within the industry to assume leadership to shape a new vision for the sector,” said John Snobelen, a member of the Ontario Horse Racing Industry Transition Panel and a former provincial cabinet minister. “The panel will work with the sector to help it move toward a sound future.”

While the government is talking about signing agreements with the remaining tracks within weeks, MacIsaac said he has no deadline for negotiations.

“There’s still discussions going on, both for the slots and with the transition panel,” he said. “That’s about all I can say.”

“I don’t think there’s any particular drop-dead date with respect to racing. Historically, we start racing at the end of April. But that’s not cast in stone, either.”

Talks continue on finalizing a lease agreement to allow the slots facility to continue as well, he said. While an agreement in principle is in place, MacIsaac said there are still details to be worked out.

“I’m neither optimistic nor pessimistic” about getting a deal done soon, head said. “We’re in the process of trying to get a deal on a couple of different levels that are not finalized. I really can’t comment on it beyond that.”