In her 11 years as president of Cambrian College , Sylvia Barnard has seen the school go through a metamorphosis.
Jun 3, 2013 8:45 PM By: Heidi Ulrichsen 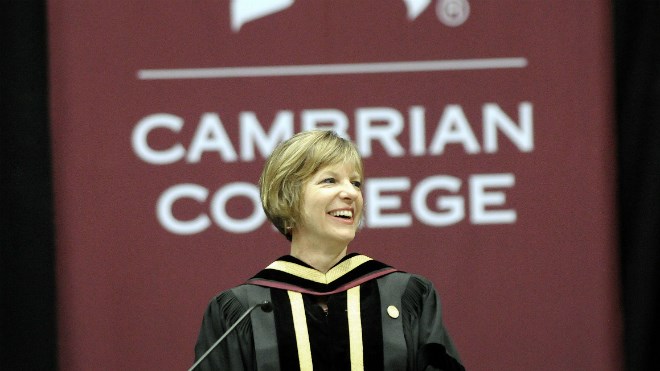 In her 11 years as president of Cambrian College, Sylvia Barnard has seen the school go through a metamorphosis.

Back in 2002, nearly 100 per cent of the college's students came from Northern Ontario, as opposed to today, when about 30 per cent come from outside of the north.

“You could count on two hands the students that came from anywhere south of Parry Sound,” said Barnard, who spoke to Northern Life recently about her career in advance of her June 30 retirement.

She said the college is attracting more students because it's changed its program mix to serve “the local community and the broader global community at the same time.”

For example, Cambrian is one of only two colleges in the province to offer a three-year ultrasound technician program, Barnard said. The college has also become known for its co-op trades apprenticeship programs, she said.

“We have companies from Kitchener-Waterloo-Hamilton saying to their employees' children, 'We want you to come and work here, but go to Cambrian and get that co-op apprenticeship qualification.'”

The 59-year-old has been working in the education sector for about 35 years — 22 as a principal and superintendent in the elementary and secondary school system, and and other two as a vice-president at Georgian College in Barrie.

During her time at Cambrian, Barnard said she's overseen a change in how college education is provided. A decade ago college teaching methods consisted mostly of face-to-face instruction.

“Now everybody here is involved in online,” she said. “You can do a whole program online.”

During her tenure, Cambrian has also added facilities such as the Xstrata Nickel Sustainable Energy Centre, with a focus on environmental sustainability.

It also launched education innovations such as the Mobile Trades Training Trailer, a mobile trades shop that brings training to aboriginal and rural communities, as well as to industry.

But Barnard said success hasn't come without her share of difficult decisions.

In the past four years, the college absorbed a $10-million drop in government grants. In 2010, dealing with a $7.5 million funding shortfall, Cambrian cut its daycare centre and restructured its maintenance operations.

Barnard has managed to get the college back on a solid financial footing, with the institution projecting a balanced budget for 2013-2014. She's also presided over the suspension of several of the college's programs.

Barnard said one of the most frustrating things for her has been convincing the province that the college needs more funding. She said northern colleges just aren't top of mind for the government.

“They don't see us as being the technological institutes across the north that we are,” she said.

There's also a perception that universities are the way to go when it comes to getting an education, Barnard said.

“You talk to the parents and students, even in Grade 9, and only one per cent are saying they're going to go on to college,” she said.

Barnard relates a conversation from former Vale executive Mark Cutifani, who said for every university-trained engineer the company hires, it needs nine college-trained technologists and technicians.

“That's the kind of message we're constantly trying to get out there,” she said.

While Barnard's years at Cambrian have been a lot of work — she regularly puts in 80-hour work weeks — it doesn't mean she hasn't had any fun.

She laughs as she recalls being a dunk tank victim during frosh week, an experience she describes as “invigorating.”

In 2011, Barnard also participated in Dancing with the Stars for Easter Seals Kids. She said she was told she'd only have to commit an hour or two a week of her time, but that turned into an hour or two a day.

“It was fulfilling personally because I was able to reattach a piece of myself I hadn't been involved in for a long time, because I spent some time in the National Ballet School when I was 13.”

She said her favourite time of the year is Cambrian's convocations, because she gets to hear from graduates, who often have inspirational stories.

At one of last month's convocation ceremonies, a middle-aged graduate told Barnard her eight kids were in the audience.

“She helped her eight children get their post-secondary education, because she knew it was important,” Barnard said. “When they were all done, they said it was her turn. They supported her to get hers.”

Although she's retiring, Barnard will still be busy.

She and her partner, Ron Whitman, are building a studio on their property for her to work on stained-glass art projects. In August and September, the couple plan to travel through the United States, visiting Route 66.

In January, she and Whitman will go to live in Tanzania for three months, working with a college in that country to develop curriculum for several programs. Barnard said she hopes the experience will set the tone for her retirement.

“We really want to have that freedom to go and live in another country for a few months, really live like the people do there, soak up the culture, and contribute back.”

Barnard said she has no urge to find another full-time job, although she may do some consulting in the area of economic development.

As Barnard leaves Cambrian, she'll be handing the reins over to Peter Lawlor, who has served as the dean at the Northern Alberta Institute of Technology (NAIT)'s school of trades for six years.

She said she wouldn't presume to give him any advice, since he's an accomplished leader in his own right.

“I'm very proud to hand to him a very successful organization with a lot of potential, where it's now his turn to be creative,” Barnard said.