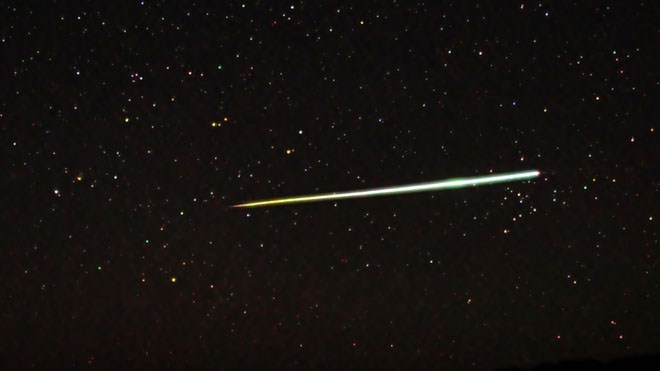 If you spotted a bright green light streaking through the eastern sky Monday morning shortly before 6 a.m., you weren't imagining things.

What you saw was likely a very bright meteor known as a fireball. There were numerous social media reports of the online phenomenon this morning in the Sudbury area.

“Saw it falling over the nickel refinery near Copper Cliff,” said Aaron Lafleur. “Looked like a shooting star but very close to the ground. Like a firecracker falling from the sky.”

“I saw it on my way to work off Lorne Street,” said Sarah Koski-Stachon. “I honestly thought I was seeing things.”

Science North staff scientist Olathe MacIntyre said the website for the American Meteor Society had nine reports of a fireball at around 5:47 a.m. Oct. 17.

The reports were mostly in Ontario and Quebec, but there was also one at around the same time in Boston, Massachusetts.

The International Astronomical Union (IAU) defines a fireball as "a meteor brighter than any of the planets.” In the scale used to grade the brightness of meteroids, that's -4 or greater.

“This one would fall into that category,” MacIntyre said. “It indicates the passage of either a fast or large meteoroid, or it could be both.”

Given where the phenomenon was spotted, MacIntyre suspects it could be part of the October Ursa Majoroids Meteor Shower.

She said it's not unusual for a fireball to have a colour, and how it appears depends on the meteoroid's composition.

If you saw the fireball this morning, MacIntyre said you should report it on the American Meteor Society website.

“It's a beautiful sight, and it's nice opportunity to see it,” she said.

The fireball is similar to the well-documented fireball that streaked across the sky in Russia in February, 2013. Remember?

If you happened to catch video of the fireball, please share it with Sudbury.com by sending a link to editor@sudbury.com.

Presentation on Rainbow board’s reopening plan to be livestreamed Aug. 11
Aug 8, 2020 9:00 AM
Comments
We welcome your feedback and encourage you to share your thoughts. We ask that you be respectful of others and their points of view, refrain from personal attacks and stay on topic. To learn about our commenting policies and how we moderate, please read our Community Guidelines.