There’s an unwritten code adhered to by people working in the mining industry: when emergency strikes, you do whatever you can to help.
Jul 17, 2012 1:33 PM By: Northern Ontario Business Staff 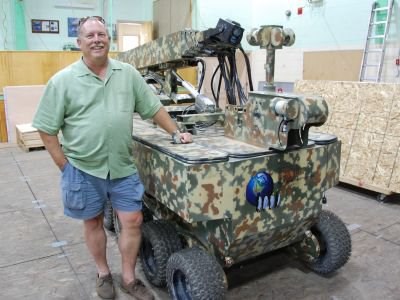 Greg Baiden, chair and chief technology officer of Penguin Automated Systems Inc., poses with one of the worker robots his company sent to Elliot Lake to aid with excavation after a portion of the Algo Roof Mall collapsed, killing two people. Photo supplied

There’s an unwritten code adhered to by people working in the mining industry: when emergency strikes, you do whatever you can to help.

That’s why Greg Baiden didn’t hesitate to offer up a pair of $2-million reconnaissance robots when he got word that part of the roof had collapsed at the Algo Centre Mall in Elliot Lake, potentially trapping people inside.

Baiden, chair and chief technology officer of Penguin Automated Systems Inc., was actually in Charlotte, N.C., en route to Florida to test a new optical communications system, when he got the call, but co-ordinating from afar, a team was mobilized from his Sudbury office.

The crew arrived in Elliot Lake on the evening of June 27, a day after the Heavy Urban Search and Rescue (HUSAR) team tasked with sifting through the rubble had reached the end of its capabilities.

Though originally created for use in underground mines, Penguin designed the robots with mine rescue in mind.

“What they’re designed to do is go in and take video pictures of an area in a mine and to do laser profiling to determine the stability of the mine,” Baiden said. “The key to them is that they work over a wireless network and they’re designed to be expendable, so you go into very difficult situations where you wouldn’t want to send anybody.”

Weighing 1,500 pounds each, the robots are each equipped with four cameras and four industrial-strength batteries that give them 12 hours of life, or six hours while working on a 45-degree angle. Their eight wheels are arranged in pairs, allowing them to bow and move the robots over large chunks of rock. They can also be fitted with track.

The robots work in tandem, creating a “virtual computer network” that allows them to receive and relay commands, Baiden explained. Communications beacons, also equipped with wireless, dropped along the robot’s route, extends the network. Every communications robot used provides another kilometre of wireless coverage.

The communications robot receives signals from the command post, and then relays the messages to the worker robot, which is equipped with a military-grade navigation system and a 10-metre boom. The boom, which has a high-definition camera attached to its end, can be extended to take pictures in inhospitable areas.

“What they needed was a picture of the rubble pile to try and determine how to excavate,” Baiden said. “They needed that because it’s hard to see if they’re trying to do any excavation.”

Footage from the expedition shows deep, penetrating cracks extending from the collapsed portionacross the roof and a massive rubble pile with no distinguishable features. Without seeing the rubble before its removal, excavators were going in blind with the cranes, Baiden said.

He noted that engineers on site were pleased with the results, since the robots offered a much less intrusive option than positioning helicopters over the rubble pile to try and get the photos.

“They were quite surprised this capability existed in Canada, forget about Sudbury,” he said.

A similar pair of robots is currently deployed at the Codelco Andina Mine in Chile, an underground copper mine located in the Andes that produces three times what the Sudbury basin produces. Penguin’s robots are being tested with the goal of removing hazardous jobs from the mine, including taking scans of an ore pass after blasting or working near areas of liquefaction.

Capable of geospatial positioning, the robots can pinpoint a location 1,000 to 2,000 metres underground on a surface map within two centimetres of accuracy. And the robots come equipped with impellers, “so, literally, you could drive this thing off a dock and it would keep right on going,” Baiden said.

Interest in the technology has been so strong following the Elliot Lake incident, that Baiden has had to increase his original production schedule from four robots to six or eight, and possibly more.

He envisions them inserting explosives, studying mine ventilation, bringing specialized gear to miners and conducting mine-rescue operations. Baiden is currently collaborating with a private company on technology to mine water on the moon, and has even been asked to weaponize them. And, following the incident in Elliot Lake, in which two people were killed and more than 20 injured, newer versions will be equipped with videorecording capabilities.

“For what they do, they’re the most accurate, non-touch survey robots in the world today, and their capability is really yet to be determined,” Baiden said.