When Sudbury Catholic District School Board trustees arrived at their May 21 board meeting, board staff unhappy about job cuts greeted them with picket signs. The board is being forced to make a number of job cuts as it attempts to whittle down a $4.
May 22, 2013 3:23 PM By: Heidi Ulrichsen 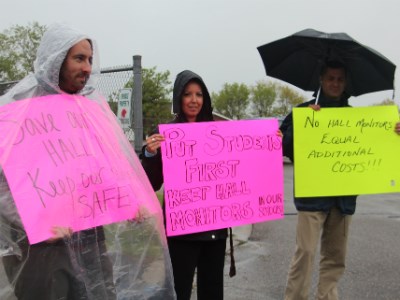 Sudbury Catholic District School Board staff protested job cuts outside of the board's office May 21. Photo by Heidi Ulrichsen.

When Sudbury Catholic District School Board trustees arrived at their May 21 board meeting, board staff unhappy about job cuts greeted them with picket signs.

The board is being forced to make a number of job cuts as it attempts to whittle down a $4.2-million accumulated deficit.

The focus of the protest was the cut of three hall monitor positions at the board's high schools. The employees patrol the schools' halls, supervising students and ensuring their safety.

“They have a very active role in terms of ensuring there's peace and harmony within the school,” said Dan Charbonneau, who represents the board's high school teachers.

None of the hall monitors themselves attended the protest.

Sudbury Catholic chair Jody Cameron said the cut will save the board about $75,000. He said he's met with representatives of the affected schools about their concerns.

But safety and security aren't big problems at the board's schools, Cameron said, adding that teachers, principals and other staff members will be able to adequately supervise students.

“In our scan across the province, hallway monitors are not a common thing,” he said.

When asked why the cut to hall monitors wasn't brought up in previous public budget deliberations, he explained it's to protect the employees' privacy, because there are so few of them that they'd be immediately identifiable.

Beyond the hallway monitor situation, the board has also announced it will be cutting 24 teachers' positions.

That's because Sudbury Catholic's enrolment, like that of the Rainbow District School Board, and indeed most school boards across the province, is declining.

This means reduced funding from the government.

Charbonneau, who is the president of the local Sudbury secondary unit of the Ontario English Catholic Teachers' Association, said he understands the impact of declining enrolment and why some layoffs are necessary.

But he contends the board is actually cutting four more high school teachers than it really needs to.

This includes three student success teachers who help students at risk of failing and one French Immersion support teacher. He said there are government funding envelopes where the board could find money to pay for these teachers.

Then there's Sudbury Catholic's efforts to reduce its complement of elementary vice-principals — it was only funded for 0.79 vice-principals, but had the equivalent of 6.6 on staff.

The board's director of education, Catherine McCullough, said that through a combination of assigning vice-principals more teaching time and retirements, Sudbury Catholic now only has one excess vice-principal.

Charbonneau said he's not impressed with the practice of giving these vice-principals more teaching duties, because teachers are being bumped from their positions.

As well, it actually costs the system more, he said, because vice-principals are sometimes paid more than $100,000 a year, while a teacher might only be paid $50,000 a year.

The board has also stated its intention to cut its custodial staff, as it has 55 custodians, or 10 more than it is funded for. Cameron said he'll likely have more information about how these cuts are being carried out at the board's June meeting.

Charbonneau said he's unhappy with how Sudbury Catholic has handled its budget over the last few years.

For example, the board has as many senior administrators as the Rainbow District School Board, but has far fewer students, he said.

It's also spent money on initiatives it wasn't fully funded for, such as full-day, everyday junior kindergarten, Charbonneau said. Then there's the fact that it had too many vice-principals and principals.

“I'm a little perturbed by trustees stating that a few years ago they were told they should spend their reserves because they may be taken away from them,” he said.

“I guess that's the way they went, and it blew up in their face, where they no longer have a surplus. They have a big deficit instead.”