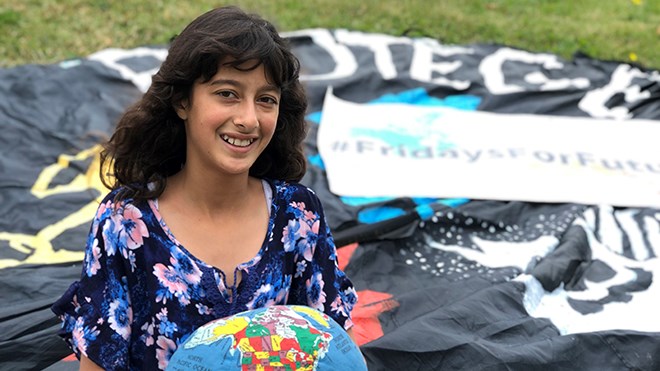 Sudbury's own #FridaysForFuture activist Sophia Mathur, 12, will be travelling to Washington D.C. next week to join 16-year-old Swedish activist Greta Thunberg on a panel at the Amnesty International Awards. Following the presentation, Mathur will join other youth in a visit to the UN and march alongside climate champs in New York City on Sept. 20. (Heather Green-Oliver/Sudbury.com)

Mathur and a handful of other young climate crusaders have been invited to sit on a panel with Thunberg at the Amnesty International Awards in Washington D.C.

"I'm nervous but also excited because Greta Thunberg is my idol," Mathur said.

"She was a big inspiration for me to join #FridaysForFuture because we share a passion for action on the climate crisis."

Meeting Thunberg is a big deal, but following the awards presentation in D.C., the pair will share their passion with more than a million of other young strikers from around the world in a climate march in New York City on Sept. 20.

"This is important to me because it's my future," Mathur said.

Mathur was one of the first young people to join the #FridaysForFuture movement and has been striking once a month on Fridays since Nov. 2, 2018 in solidarity with Greta Thunberg. Since then, youth from around the world have joined the movement.

In the fight against climate change, Thunberg spent two weeks sailing across the Atlantic ocean in a zero-carbon emissions sail boat to take part in a UN climate summit in New York.

Like her idol, Mathur and her mother also refuse to fly to the awards presentation held in D.C.

"A lot of people have been asking me what type of transportation I'm taking to New York and Washington," Mathur said.

Aside from using their own hybrid vehicle, Sophia and her mom will rent a green car to get to D.C. and take trains to travel to New York City.

"Greta did better than me, she took an electric yacht."

"I look up to her and I feel #FridaysForFuture is definitely going to be part of the change that we are going to make in the world."

Needless to say, Mathur is optimistic that the movement will make a difference in the future of the planet.

"When I grow up I want to be a lawyer. My mom would like me to specialize in environmental law, but I believe that in the future we won't have to worry about the environment.

"I feel like we will solve the climate crisis and I have hopes that in the future we won’t have to worry about this."

More information on #FridaysForFuture strikes can be found on the Coalition for a Liveable Sudbury website.

Here are seven stories to start your day
Jan 24, 2020 6:00 AM
Comments
We welcome your feedback and encourage you to share your thoughts on this story. We ask that you be respectful of others and their points of view, refrain from personal attacks and stay on topic. To learn about our commenting policies and how we moderate, please read our Community Guidelines.