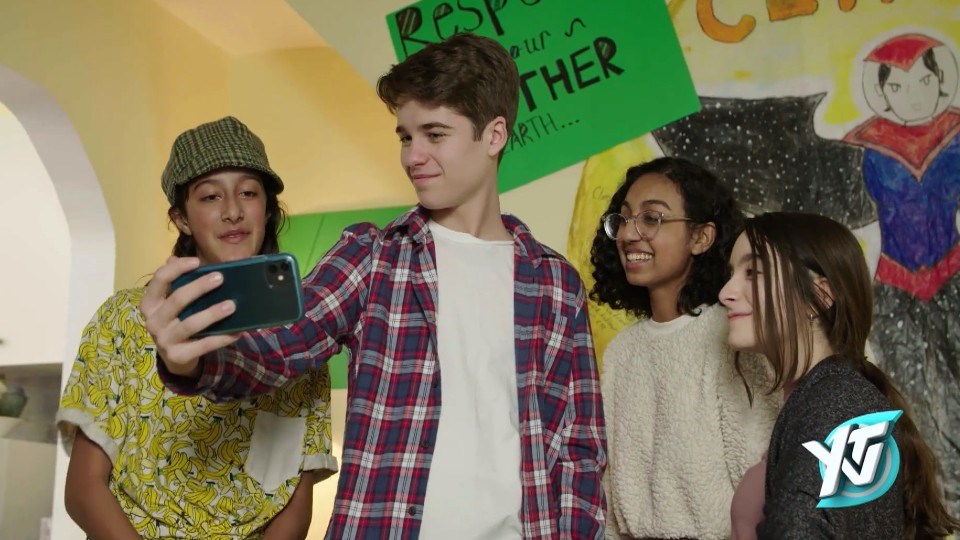 Starring in a special on young climate activists that airs on YTV on June 5 is Sophia Mathur (at left), a youth activist from Sudbury. Also starring in the documentary is (from left of Sophia) Cooper Price, Charlene Rocha and Hannah Alper. (Screen capture)

A new documentary to air on YTV next month features none other than young Sudbury climate activist Sophia Mathur.

It airs on the United Nations’ World Environment Day, June 5, at 5:30 p.m. on YTV. The show is produced by White Pine Pictures and is inspired by the award-winning CitizenKid book collection from Corus Entertainment’s Kids Can Press.

You can watch the trailer below.

How do YOU put Earth first? Take the pledge with our four youth activists as they set out to tackle climate change issues in a new #YTV original documentary CITIZENKID. Premiering World Environment Day, FRIDAY, JUNE 5 at 5:30 pm ET/PT on #YTVTheZone. #EarthComesFirst #ytvofficial pic.twitter.com/6iCBzlGkV4

Sudbury.com spoke with Sophia to find out how it all came about. The 12-year-old is the daughter of Cathy Orlando, a long-time climate activist and founder of the Canadian chapter of the Citizens’ Climate Lobby and the group’s current international outreach manager.

Sophia’s work, social media presence and extensive media coverage of her efforts led to an audition into Toronto this past January, which led to her being cast in the show. Much as she was inspired by the work of other climate activists to take up the mantle and lobby to fight climate change, Sophia hopes the show does the same for others.

“I hope people will be inspired to take action,” she said. “I hope this pilot turns into a TV show because I enjoyed being with the cast and crew, and I really would like to see what else we can come up with.”

Making new friends and working with Hollywood producers made for a fun experience, Sophia said, adding that she couldn’t do it alone.

“I would like to thank my music, dance, and drama teachers, including Ms. Ginny World, Mr. Rayburn, the Gauvreau Academy, the Sudbury School of Dance, and the earthdancers,” she said. “I would also like to thank the Mother Earth Project and Kallan Benson for introducing me to the Parachutes for the Planet. Parachutes for the Planet were a big part of the documentary.”

Since Kids Can Press started the CitizenKid book collection 11 years ago, it has sold 1.6 million copies worldwide, in 21 languages and territories “covering themes ranging from children’s rights to biodiversity to food and water security,” said Lisa Lyons Johnston, publisher and president of Kids Can Press and executive producer of “CitizenKid: Earth Comes First.”

The documentary aims to provide a behind-the-scenes look at how young activists are using social media to amplify their voices. In fact, Corus Kids incorporated social media into the premise of the show, saying it’s their first original production to integrate social media outreach and engagement.

“To mobilize the country to unite on climate change issues, the documentary is asking Canadians to take part online in their #EarthComesFirst movement, which encourages people to pledge on social media how they put the Earth first in their everyday life, for example, shopping locally, walking or biking more often, or turning off the lights and electronics when not in use,” the company said in a news release.

You’re invited to record a video with your pledge following the format below and post it to your social media account:

Meanwhile in Washington, D.C., the other two activists, Sophia being one of them, meet with the creators of Parachutes For The Planet, an initiative created by Mother Earth Project. To raise awareness about the climate emergency, Mother Earth Project encourages individuals, schools, and communities around the world to decorate circular pieces of cloth with artwork and collective commitments to sustainable actions. Parachutes are a metaphor for bringing the planet back to a safe, sustainable world.

All four activists head to Washington, D.C. for Fridays For Future to meet youth involved in the climate strike event. Fridays For Future is a global movement that began in August 2018 after Greta Thunberg began striking every Friday outside the Swedish Parliament. Since then young people continue to gather and strike every Friday to demand more aggressive action from their governments and the international community.

Finally, inspired by the Nature-Based Climate Solutions Summit, all four activists organize an environmental rally with the students at Equinox Holistic Alternative School, an environmentally conscious grade school in Toronto.

Who are the young activists?

Cooper Price is an ambassador for Climate Action Now, a volunteer climate change and environmental organization, and an active member with SSUNS, a high-school level model UN conference where youth leaders discuss and collaborate to discover solutions to global issues. Find him on Twitter @CooperPrice.

Charlene Rocha is a 16-year-old eco-warrior who has lobbied the government and has fought to get the city of Pickering, where she lives, to declare a climate emergency. Find her on Instagram @_charlenerocha