Two years later they founded Leak Preventions Ltd. to push the technology forward and market it to the oil and gas sector. Fuller is chair of the company's board of directors, and Chamberland is its president and CEO.
May 10, 2014 1:21 PM By: Jonathan Migneault 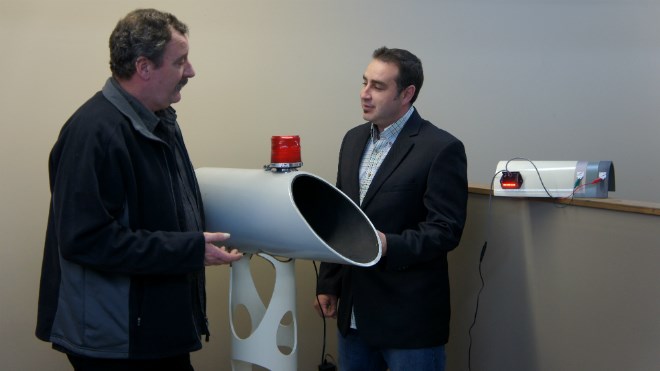 Dan Chamberland, right, president and CEO of Leak Prevention Ltd., and Peter Palko, manager of distribution and field services at Fuller Industrial, discuss the leak prevention systems they have developed for the oil and gas and mining industries. Supplied photo.
Two years later they founded Leak Preventions Ltd. to push the technology forward and market it to the oil and gas sector.
Fuller is chair of the company's board of directors, and Chamberland is its president and CEO.

The technology works a lot like the classic board game Operation, but at an industrial scale.

When the special paint they have developed is chipped, it completes an electrical current that sends a signal to the pipeline's operator. That operator can then take corrective action to prevent a potential leak before it happens.

Fuller said Leak Prevention's patent-pending technology is the only way to prevent a pipeline leak before it occurs.

In the last 20 years, said Fuller, oil companies have spilled 2.5 million gallons from their pipelines. In a bad year, pipeline leaks can cause up to $5 billion in damages.

“The environmental impact is really hard to quantify,” said Fuller. “If you're hurting people and people are getting killed, how do you quantify that? It's a big problem.”

There are several existing leak prevention technologies, but Fuller said they all have their flaws.

The first is a monitor that measures the flow of oil in a pipeline.

“The problem with that is there are natural fluctuations for different reasons inside of what's the normal range of flow,” Fuller said.

Small leaks that do not change the normal range for the flow of oil, he said, would not be caught by such a monitoring system.

The second technology is what the oil and gas sector calls a “pig.” A pig, in the context of oil and gas pipelines, is a probe that travels inside the pipeline at high speeds.

Pigs are equipped with instruments to accurately monitor the structural integrity of a pipeline. The problem, said Fuller, is they can only monitor parts of the pipeline with which they make direct contact.

While pigs travel at high speeds, they cannot relay real-time information on the entirety of a pipeline.

Finally, there is a range of emerging sensory technologies for pipelines that range from sniffers to different types of cables that have varying degrees of accuracy for leak detection.

Depending on the size of the pipeline, Leak Prevention's technology would add around two to five per cent to the cost of building the structure.

Fuller said that added cost meets oil companies' return on investment requirements when the potential savings from preventing leaks are factored in.

Thanks to his involvement with the mining supply and service sector, Fuller has already managed to sell his leak prevention technology to mining companies such as Vale, Detour Gold and Barrick Gold Corporation.

The miners have been testing the technology on their rubber-lined pipes used to carry slurry.

On May 1, 2014, Leak Prevention was one of four companies to present at the Sudbury Pitch event, organized by the NORCAT Innovation Mill.

Fuller promoted the company to a room filled with potential angel investors. In his pitch, he asked for $800,000 to help kick-start the company.

“That money will get us to market fast,” Fuller said.

With a number of competing leak prevention technologies coming to market, he said getting to market as soon as possible will be important because oil and gas companies could settle on an industry standard. “The timing is now,” he said.

Investors with feet in the oil and gas sector would also be a boon, he said.

While he has deep connections to the mining industry through Fuller Industrial, the oil and gas sector is a bit more distant from the Sudbury basin.

But Fuller and Chamberland want to set their sights beyond the oil and gas sector. Fuller said their leak prevention technology could be applied to other structures such as bridges, rail cars and tankers. Basically anything where a structural failure of that structure can be costly, he said.