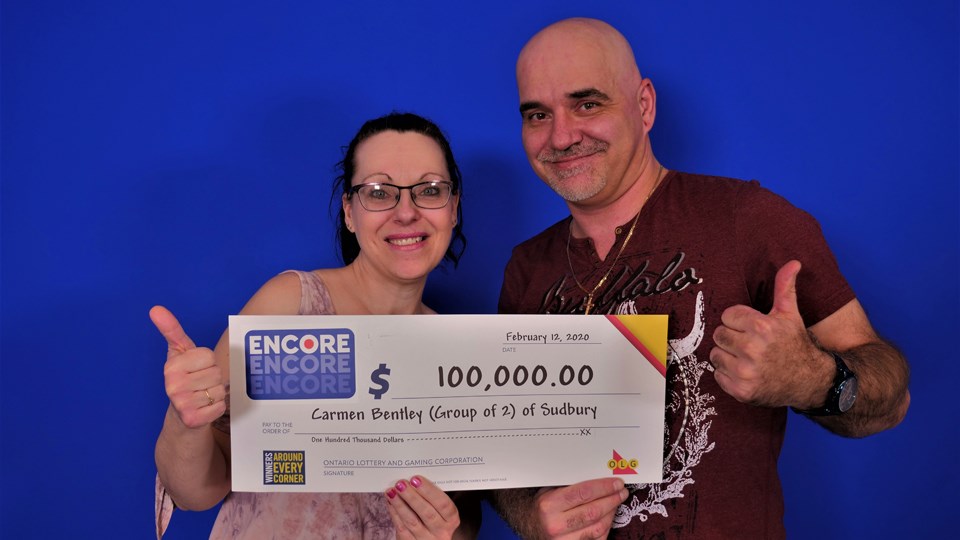 Saying “yes” to Encore paid off for Carmen Bentley of Sudbury and William Samarian of Coniston. (Supplied)

Saying “yes” to Encore paid off for Carmen Bentley of Sudbury and William Samarian of Coniston.

Carmen and Bill matched the last six of seven Encore numbers in exact order in the Feb. 11, LOTTO MAX draw to win $100,000.

Carmen, a 45-year old occasional teacher and Bill, a 49-year old truck driver, were on their way to Niagara Falls from Sudbury when they discovered their win.

“We were gassing up when Carmen thought to check our ticket on the OLG Lottery App,” Bill said while at the OLG Prize Centre in Toronto to pick up their cheque.

“Needless to say, we had a cheery drive down with a detour to the Prize Centre."

Carmen, a mother of one and Bill, a father of three, don’t have specific plans for their win yet, but decided to continue on to Niagara Falls as they had originally planned.

“It’s surreal, it’s such a blessing for us,” they said.

Encore offers 22 ways to win and can be played in conjunction with most lottery games for an extra $1. There is an Encore draw every day.

The winning ticket was purchased at Kwik Way on Highway 69 in Val Caron.

Bus route cancellations should ease within a few weeks
Sep 20, 2020 10:00 AM
Comments
We welcome your feedback and encourage you to share your thoughts. We ask that you be respectful of others and their points of view, refrain from personal attacks and stay on topic. To learn about our commenting policies and how we moderate, please read our Community Guidelines.