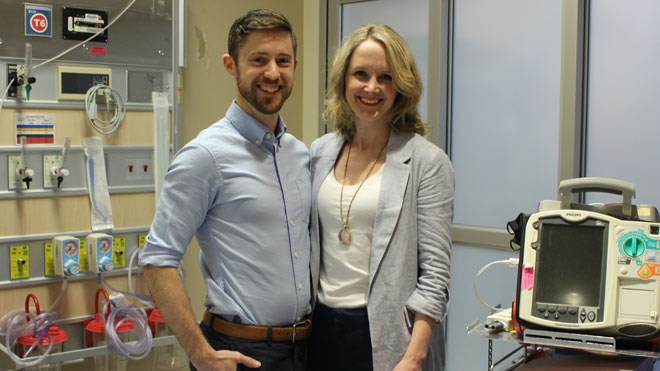 Husband and wife doctors Robert Ohle and Sarah McIsaac have teamed up to offer free CPR lessons every weekend in May at Science North. (Supplied)

Husband and wife doctors Robert Ohle and Sarah McIsaac have teamed up to offer free CPR lessons every weekend in May at Science North.

This initiative is part of the couple’s Northern City of Heroes program which focuses on improving survival rates for people in Sudbury who suffer from a cardiac arrest.

McIsaac says they were pushed to act because of the extremely low survival rates for anyone suffering a cardiac arrest.

“We need to improve the number of people who are trained in CPR in Sudbury,” she said. “Cardiac arrest kills and your chances of survival are only five per cent without bystander CPR.”

Those survival rates increase significantly once someone starts performing CPR, according to Ohle.

“Approximately 80 per cent of cardiac arrests occur at home,” he said. “Therefore, if your loved one suffers a cardiac arrest you are in the best position to help them and the single most important thing you can do is CPR.

“Unfortunately in Sudbury in 2018, less than half of those who suffered a cardiac arrest had CPR performed on them prior to an ambulance arriving. We want to increase that number.”

McIsaac says that one of the strongest reasons people do not perform CPR is because they have a fear of doing something wrong or perhaps making things worse.

“When you perform CPR, your hands become the heart, you are pumping blood around the body, delivering oxygen to vital organs, the most important of which is the brain,” she said.

“People have this fear that they might break a rib or somehow hurt their loved one.  In a cardiac arrest, your heart has stopped beating and you are quickly dying or already dead.

“We can fix broken ribs, but we cannot fix irreversible damage to the brain caused by lack of oxygen.”

The goal of the Northern Heroes program is to educate the public and make people more comfortable to step in should they see someone in distress. By increasing the number of people trained in CPR, the doctors hope to also increase the survival rate for people in the Sudbury area.

Every weekend in the month of May, from 11 a.m. until 3 p.m., the public is invited to come and try hands-only CPR in Science North’s main lobby. Thanks to a partnership between HSN, the Labelle Learning and Innovation Centre, and Science North, people will have the chance to learn proper techniques and test the effectiveness of their skills on the most technologically advanced medical mannequins.

Improving survival rates for patients who suffer from cardiac arrest also ties back to several key goals in HSN and HSNRI’s new Strategic Plan, including being patient and family focused as well as being a socially accountable organization.

For more on the new plan, visit www.yourhsn.ca.

Ontario mulls regional reopening approach, due to increased testing data
May 29, 2020 1:41 PM
Comments
We welcome your feedback and encourage you to share your thoughts. We ask that you be respectful of others and their points of view, refrain from personal attacks and stay on topic. To learn about our commenting policies and how we moderate, please read our Community Guidelines.