It was a momentous autumn for Lilly Creek Vaccines Inc., as they received a significant provincial grant to develop a new vaccine, and their parent organization broke ground for their coming facilities.
Jan 4, 2016 4:08 PM By: Ella Myers - Northern Ontario Business 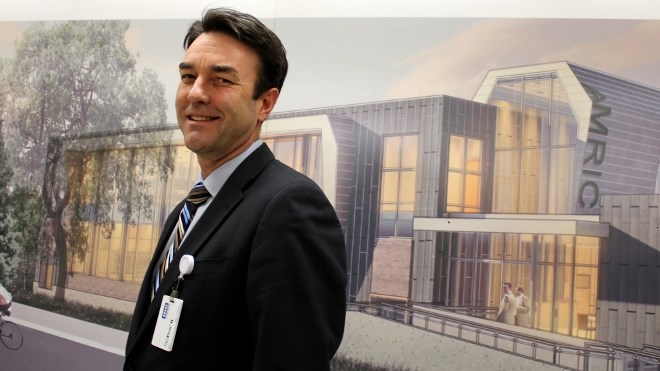 Mark Hartman is the interim chief operating officer of Advanced Medical Research Institute of Canada (AMRIC). Photo supplied
It was a momentous autumn for Lilly Creek Vaccines Inc., as they received a significant provincial grant to develop a new vaccine, and their parent organization broke ground for their coming facilities.

As a for-profit subsidiary of the Advanced Medical Research Institute of Canada (AMRIC), Lilly Creek will be housed in a former elementary school in Sudbury’s South End. The frosty November groundbreaking marked a new phase for AMRIC that will allow it to expand on its research and product development capacities.

The Northern Ontario Heritage Fund Corporation (NOHFC) put $250,000 into Lilly Creek in October as part of its mandate to invest in people's talents and skills, and to promote the development of the life sciences industry in Northern Ontario, said CEO Sean Thompson.

The investment will be put towards a new vaccine to treat H. pylori, the bacterium responsible for ulcers, gastritis, and in some cases, stomach cancer.

“This is an innovative project taking place between researchers at AMRIC and researchers at the NRC (National Research Council) in Ottawa. They looked at the project and the potential of it to create jobs and create a new company as something attractive,” said Thompson.

The NRC partnered with Lilly Creek and AMRIC to support the project last January. There is currently a team of researchers working on the H. pylori vaccine at AMRIC's current site that includes a number of PhD and Master’s students.

“As the company grows, we hope to bring some of these people into the company,” said Thompson.

“The investment may be made by the province, but the work will be done locally so the money will flow back into the local economy,” said Hartman.

After the initial investment and development, he hopes to continue the cycle. The goal is to develop a product, sell or transfer the development to a pharmaceutical company, then re-invest the money into AMRIC and its spinoff companies to build on the research.

The initial phase of the project has just begun and will take approximately 18 months, with clinical trials commencing within two to three years, and a marketable product anticipated within eight to 10 years. But AMRIC and Lilly Creek have an eye on the end game.

“At the end of the day, and the key thing is, and the reason we have these spinoff companies, is it's great to have these discoveries, but we need a mechanism to get a discoveries into a product that can actually get to a patient,” said Hartman.

The new vaccine would help Northern Canadians, but could also have a global impact.

“Lilly Creek is a Sudbury-based global organization, and a lot of the patients who will benefit from this vaccine aren't only in Canada and the North, but around the world,” said Thompson. “We want to think about it as a company that's going to have a global impact and global partnerships.”

AMRIC's other subsidiary, Ramsey Lake Pharma, has made similar advancements lately with the development of a novel cancer drug. The two subsidiaries will take on other research projects to develop drugs within the same respective families as AMRIC grows, said Hartman.

The groundbreaking illustrated the excitement for the new projects in the community and beyond. Funders of the facility, including FedNor, NOHFC, City of Greater Sudbury and the Greater Sudbury Development Corporation, joined local experts to speak to its significance.