AirVU is a Sudbury-based inspection and maintenance company that’s started to serve the electricity industry with unmanned aerial vehicles
Apr 13, 2016 9:41 AM By: Northern Ontario Business 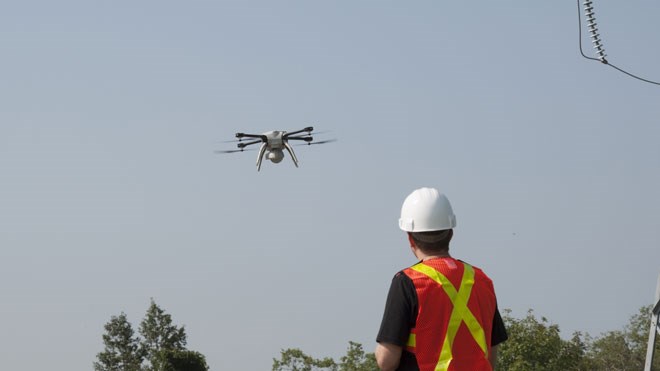 By profession, Stephen Costello is an engineer working in the power-generation industry; by hobby, he’s a trained, private pilot. With the launch of AirVU, he’s bringing his two passions together to provide the industry with a new tool for maintenance and inspection.

Costello is one of the principals behind AirVU, a Sudbury-based company offering inspection services for electricity assets through unmanned aerial vehicle (UAV) technology.

Following a long career working for municipal utilities companies around the province, Costello branched out eight years ago, forming his own company, Costello Utility Consultants, serving as "an extra pair of hands" for various utilities around Ontario.

After four years of operating out of his basement, Costello hired his first employee and set up shop in a former Catholic elementary school in Sudbury's West End.

Costello Utility Consultants now has 15 employees, offices in Sudbury and London, and is planning a further expansion to Ottawa this spring.

"We work almost exclusively in utilities, but we are branching out and doing other engineering associated with high-voltage power: generation, renewables, solar, wind, and larger power users," Costello said. "We have a really specialized niche market."

As a trained, private pilot, Costello had watched the evolution of UAV technology for years and viewed the marriage between engineering and UAVs as a natural fit.

UAVs, however, allow operators to inspect those assets from a new, higher perspective, while still staying far enough away to maintain safety.

Costello recognized that as technology advanced and UAV use became more commonplace, his firm needed to take leap of faith. So he set up an affiliate company, AirVU, and purchased a Skyranger UAV, manufactured by Waterloo-based Aeryon Labs Inc.

"We really felt that if we were going to be in this market, we needed to go now, because if we waited six months or a year, somebody was going to be there ahead of us."

The Skyranger captures data with an attached digital camera that boasts 30X zooming capabilities — the first of its type in the world. Data captured is transmitted back to 3D modelling software, which can analyze the data and create a map or report within a few hours. The savings for clients, in cost and time, is significant.

Costello believes AirVU stands apart from other companies using UAVs for its commitment to becoming completely compliant with all regulations and standards required by Transport Canada.

Originally developed for military use, Aeryon is the only commercial-grade UAV currently on the market that is a compliant operator, according to Transport Canada.

Currently, UAV operators must apply to the federal transportation agency for individual flights depending on the area, conditions, and pilot — a long and complicated process that prevents AirVU from responding immediately to client requests.

But some operators, such as the OPP, the RCMP and a handful of commercial companies, have standing permits with Transport Canada for one- to three-year blanket operation that allows them to respond to situations immediately, Costello noted.

"That's what we want," he said. "We need the ability to be able to go out quickly, because if there's a problem and somebody needs us to go look at something, it's probably urgent."

AirVU employs trained pilots to operate the UAVs, and Costello is currently in talks with a local aviation company to set up a formal partnership.

"We have a working agreement where we're cross-training," Costello said. "I fly with them, and they are supplying me with two fully licensed pilots and we're training them."

As UAVs become more popular and cheaper to operate, more operators are using them for a variety of applications. But with that come stories about irresponsible drone use as well, Costello said.

He estimates AirVU has turned down more jobs than it’s completed because there was some issue with the flight.

"In their world, if shortcuts are taken, people get seriously injured or killed," he said.

Costello has spent the last six months presenting at technical conferences educating companies in the electricity industry on what regulatory requirements they need to know when hiring drone operators.

“Mining and forestry and large industries realize they’re not off the hook simply by hiring somebody,” Costello said.

“If there’s a problem, they can be liable as well, so they take care when hiring contractors. This is no different.”

Aeryon is working to help AirVU become compliant with Transport Canada requirements, and in the meantime, AirVU will continue to conduct planned flights.

The company is also open to applying its technology in other markets, including mining, forestry, search and rescue, home inspections, and agriculture.

“This machine, we want to use it for mapping, but we realize that other applications are going to pop up,” Costello said. “Everybody that does some sort of technical job is going to come up and say, ‘We could use that.’”

He estimates the use of UAVs in technical work will become standard in about 10 years’ time.