Sudbury mine rescuers taking on the world in Poland

“We're just happy that we're going and that they're giving us that opportunity,” said Lorne Plouffe, the team's captain. “It's great to show off the Vale mine rescue teams to the rest of the world.
Sep 4, 2014 8:52 PM By: Jonathan Migneault 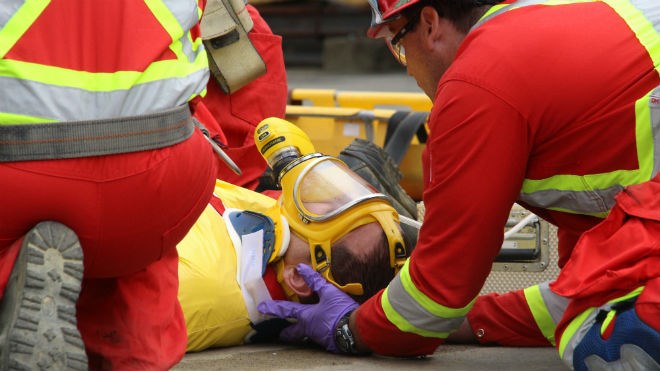 Vale's East Mines Rescue Team demonstrated a mine rescue with a man who volunteered to fake a leg injury and breathing problems. The team will compete in the International Mine Rescue Competition in Katowice, Poland, on Sept. 10-11. Photo by Jonathan Migneault.
“We're just happy that we're going and that they're giving us that opportunity,” said Lorne Plouffe, the team's captain. “It's great to show off the Vale mine rescue teams to the rest of the world.”

In June, Plouffe and his team of seven experienced mine rescue professionals won the provincial championships.

It was his third time winning that honour, but this year will be his first chance to compete on the world stage.

Vale's team will compete against 22 other teams from 20 countries, including China, Australia, and Poland.

The teams will compete on theoretical knowledge and will compete in first aid and CPR, as well as in a mine rescue simulation.

To give media a taste of what they'll be doing in Poland, the team demonstrated a mine rescue, in which a man pretended to have breathing problems and a broken femur.

The team members gathered around the injured miner, gave him oxygen and treated his broken leg, while preparing him for emergency medical services.

Mike Johnson, the team's briefing officer, said he and his teammates have adjusted their training the last two weeks to prepare for Poland.
In Sudbury, the team members all specialize in hard-rock mining — and rescue — but in Poland they'll be competing in a coal mine.

“Coal mining is a different aspect where we may have to swing the ventilation to follow us because the atmosphere is more gaseous and explosive than ours,” Johnson said.

But his team captain said he expects the team to perform well, even in a foreign environment.

“I have the utmost confidence in any of my team members and I would follow any of these guys into a real emergency,” Plouffe said.

Rick Bertrand, president of United Steelworkers Local 6500, said he has high hopes for the Vale team.

“To see one of our teams being part of the international competition is great, and it will put us on the map,” he said. “We wish them a lot of luck, and I'm hoping they can bring the championship here.”

Vale's East Mines Rescue Team will not be the only Sudbury representatives at the competition. KGHM International has already flown some of its Sudbury miners to Poland. The company has its international headquarters in Poland.

Mike Parent, KGHM's regional health and safety manager in Sudbury, said the company is sending a younger, less experienced team to Poland and treating the competition as a learning experience.

“We expect these members will be with us for a long time, so it was more advantageous for us to send more young and less experienced personnel,” he said.

The team travelled to Poland a week early, to meet with Polish mine rescue workers and learn new techniques.

John Hagan, the Ontario Mine Rescue provincial training officer, travelled with KGHM's team to provide them with added assistance.