Sudbury to host the mining world in 2016

Sudbury will host the mining world next year for the tenth International Mines Rescue Competition. The competition, which is scheduled to run from Aug. 19 to Aug.
Sep 28, 2015 9:18 PM By: Jonathan Migneault 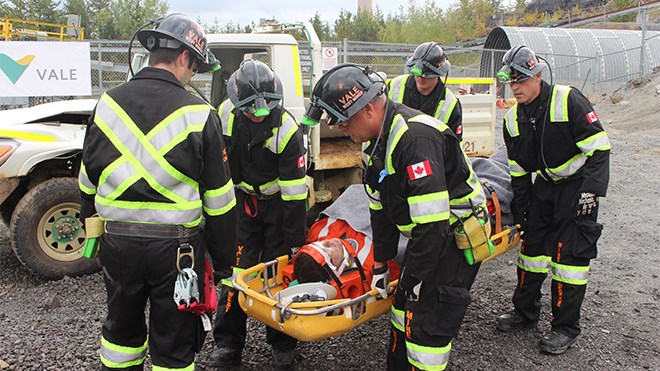 The Vale West Mine Rescue Team showcased a scenario where they rescued a man from a Jeep that had been in a crash at a media event Monday, to promote the next International Mine Rescue Competition. Sudbury will host the event in 2016. Photo by Jonathan Migneault.
Sudbury will host the mining world next year for the tenth International Mines Rescue Competition.

The competition, which is scheduled to run from Aug. 19 to Aug. 26, 2016, will be the first time the world's best mine rescue teams meet to compete in Canada.

“To be hosting this for the first time in Canada, and here in Sudbury, I think is quite appropriate,” said Candys Ballanger-Michaud, CEO of Workplace Safety North, which will host and organize the event.

Workplace Safety North has collaborated with a number of mining sponsors – including Vale, Glencore, KGHM, Goldcorp and Dräger – to bring up to 30 teams, from as many as 20 countries, to Sudbury for the competition.

Having 30 mine rescue teams on the roster would make the 2016 edition the biggest International Mine Rescue Competition to date.

The teams will compete in different events, including a simulated emergency scenario, firefighting, and first aid.

At a media event Monday, the Vale West Mine Rescue Team showcased a scenario where they rescued a man from a Jeep that had been in a crash.

They used jaws of life, and other tools, to remove the Jeep's door and safely remove the man from the vehicle.

During the competition, audiences will be able to watch similar events thanks to underground cameras at the various competitive venues.

Tim Maloney, Vale's mine rescue co-ordinator in Sudbury, said it will be a challenge to balance the competition for mine rescue styles and techniques.

Many of the competitors, he said, are expected to come from the coal mining sector, where rescue teams operate differently than Sudbury's base metal mine rescue teams.

But Perry Simon, a member of the Vale East Mine Rescue Team, which participated in the competition, said he was made to feel right at home as soon as he stepped out of the airport.

“The competition itself was by far the most interesting I've seen,” he said.

“The experience was phenomenal,” he said.

While the Polish competition set a high bar, Simon said he looks forward to having Sudbury host the mining world.

While he hopes to compete again in the international competition, he said he'll also be happy to help out in any way he can, so he can make the experience just as memorable for the international teams, as his trip to Poland was for him.