One year later, the fight continues for a need-based approach to autism funding
Feb 16, 2020 1:00 PM By: Matt Durnan 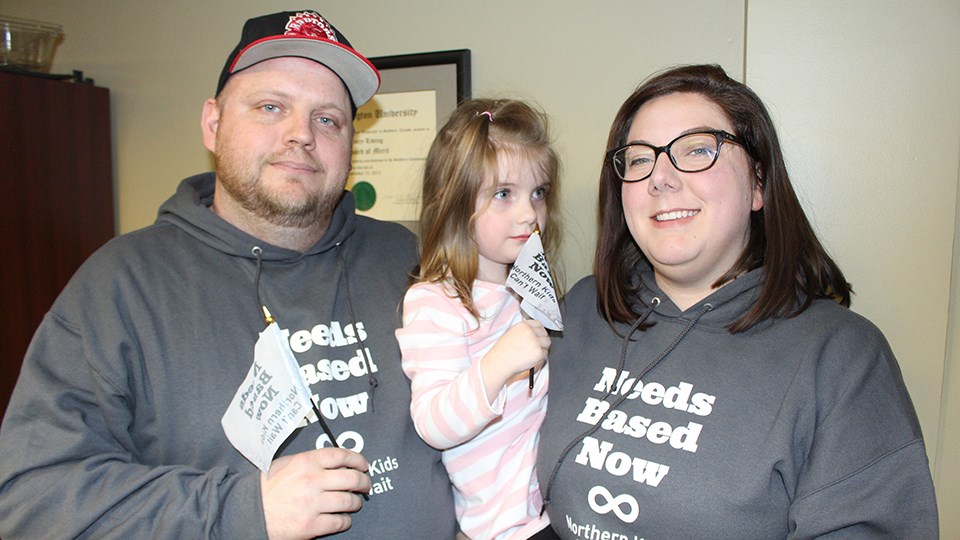 (From the left) Sean, June and Julia Staddon, who will be representing the Northern Ontario Autism Alliance at Queen's Park Feb. 18, in protest of the delays to the Ontario Autism Program. (Matt Durnan/ Sudbury.com)

It has been a little more than a year since the Ford government announced sweeping changes to the province's autism program and Sudbury families are still fighting for a need-based funding model for children and youth with autism.

In the wake of the changes announced on Feb. 6, 2019, Sudbury's autism parents established the Northern Ontario Autism Alliance and the group has been pushing to have the voices of Northern Ontario heard.

Sean Staddon sits on the Ontario Autism Coalition board and will not only be attending Tuesday's protest but speaking as well. Staddon explained that Northern Ontario autism families have been fighting this battle since before the Ford government took office, and that it essentially took massive changes to the program for the north to get a seat at the table and have their voices heard.

"I think it's important what NOAA has been able to do in a year, in that we were an isolated voice," said Staddon.

"Myself and Julia (Staddon) have been advocating for a few years and no one from southern Ontario really took note until the last year. I think our ability to get our message out got noticed by these larger advocacy groups and they asked us to sit on the board, and they realized that the problems they have in areas like Toronto are ten-fold up here."

Julia and Sean have two young children with autism, two-year-old son Chaz and four-year-old daughter June, and the Staddons are one of the lucky families who have good-paying jobs and are able to afford therapy services for their children, but it's not an advantage that all families have.

Many Sudbury families with autistic children are still waiting for funding and for a program that addresses the specific needs of each child.

Here in Sudbury, the Staddons and the NOAA are advocating for a restoration to the capacity of services like Child and Community Resources that has seen numerous cuts due to the province's autism funding model.

"We already have some of the longest wait times in the province," said Julia. "We're asking for things like travel to be taken into account, as well as consideration for our Francophone and Indigenous populations."

For Sudbury's autism parents, it's very much felt like one step forward and two steps back as the fight on the frontlines for services their children need. While there have been some positive steps made, they are often met with a gut punch that takes some wind out of the sails of those who are fighting.

Children, Community and Social Services Minister Todd Smith visited Sudbury last summer, telling a group of Sudbury autism parents that a working group was taking a close look at the Ontario Autism Program and that a needs-based model would likely be implemented by April 2020.

This was met with some cautious optimism by parents, who at the time felt Smith was a step forward from his predecessor Lisa MacLeod and was really taking the concerns of Northern Ontario families into account.

In December, the Ford government announced that the introduction of a needs-based autism program would bot be up and running until 2021.

In the meantime, families will be invited to apply by March for interim funding of either $20,000 or $5,000 to pay for services, depending on their child's age — the maximum annual amounts they were to get under a failed plan announced in 2019.

"The one-time funding provides the same fixed amount of money based on a child's age, which completely ignores a child's individual level of need," said the Ontario Autism Coalition in a Feb. 12 news release.

"While Doug Ford forces children to wait, these amounts will not sustain services, and they come nowhere close to covering the real costs of intensive therapy for those with high needs. And as a result, potentially disastrous interruptions in therapy programs will occur during next year."

The NOAA will be joining the OAC at the protest on Tuesday, and Julia and Sean are staying an extra day to have someone on one time with a few MPPs.

"We're meeting with PC MPP Norm Miller (Muskoka-Parry Sound), John Fraser (interim Liberal party leader), as well as a staff member at the Francophone ministry," said Julia. "We decided that we wanted to stay for the extra day to advocate specifically for the north, not that we're not doing that on Tuesday, but we wanted someone on one meeting to really bring those points home. We're not entirely sure that the government in power will be attending the protest."

It's baby steps at this time for autism families, though there is some light at the end of the tunnel as the Staddons say that there have been more open lines of communication and they feel their message is getting through.

"They are communicating more openly, the ministry of children, community and social services are updating their website more often, they have been better, it's not radio silence," said Julia. "They are doing more meaningful consultations, the conversation is happening but it's still too long to wait, we have families in Sudbury who have been waiting since 2015 and it's just too long."

Sudbury’s unemployment rate edges upwards to 9.4%
Jul 10, 2020 5:00 PM
Comments
We welcome your feedback and encourage you to share your thoughts. We ask that you be respectful of others and their points of view, refrain from personal attacks and stay on topic. To learn about our commenting policies and how we moderate, please read our Community Guidelines.