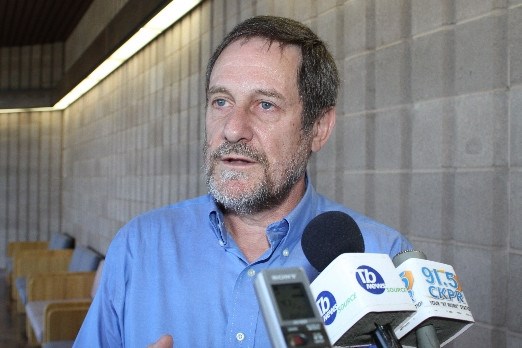 Although he stepped down as head of the Northern Ontario School of Medicine last summer, Dr. Roger Strasser still earned the same salary he did in 2018, $358,585. (Scott Paradis, tbnewswatch.com)

Although he stepped down as head of the Northern Ontario School of Medicine last summer, Dr. Roger Strasser still earned the same salary he did in 2018, $358,585.

That's according to the Public Sector Salary Disclosure Act. Nicknamed the “Sunshine List,” the document lists all public sector workers who were paid $100,000 or more in a given year.

Strasser's current title with NOSM is founding dean emeritus. He told us in a 2018  interview he would remain a faculty member once he stepped down.

Laurentian University interim president Pierre Zundel was the university's top earner in 2019, with a $286,815 salary.

University of Sudbury president Sophie Bouffard, who stepped down as the federated university's president at the end of July, earned $153,978 in 2019.

The new president of the University of Sudbury, Father John Meehan, who took over in September, did not make the 2019 Sunshine List.

Thorneloe University got a new president, the Rev. Canon Dr. John Gibaut, who started his position June 1, but he also did not make the 2019 Sunshine List.

Huntington University's salaries are not listed on the Sunshine List this year. We're looking into why this is the case.

His counterpart at the Sudbury Catholic District School Board, Joanne Bénard, earned $193,080 last year. She earned almost exactly the same amount in 2018.

She has now retired from the position, and was replaced by Paul Henry as of Jan. 1 of this year.

As previously mentioned, we weren't able to find the information for Huntington University. Last year Huntington had nine people on the Sunshine List.

If you'd like to check out the 2019 Public Sector Salary Disclosure Act for yourself, visit this website.

NOFCC scores $10K donation raised at Canadians’ Super Mario hockey game
Jun 4, 2020 8:00 PM
Comments
We welcome your feedback and encourage you to share your thoughts. We ask that you be respectful of others and their points of view, refrain from personal attacks and stay on topic. To learn about our commenting policies and how we moderate, please read our Community Guidelines.