Elementary Teachers’ Federation of Ontario presents him with honourary life membership
0
Aug 16, 2019 11:11 AM By: Sudbury.com Staff 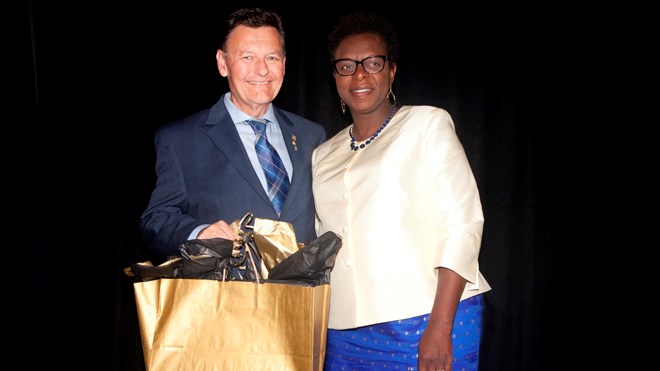 A retired Sudbury teacher with the Rainbow District School Board and a former executive member of the Elementary Teachers’ Federation of Ontario (ETFO) has earned the union’s highest honour.

Ken Collins was presented with an honourary life membership from the ETFO during a special ceremony this week.

Collins is a journalist turned teacher and former executive member of both the Rainbow Board teachers local and the ETFO provincial executive. The award was presented in Toronto.

Honorary life memberships, the Federation’s highest form of recognition, are given to members who have retired from the education profession and have given outstanding service to the Federation.

The union said Collins taught all grades over the course of his career and served as president of the former Ontario Public School Teachers’ Federation (OPSTF) Sudbury District Teacher Local from 1995-1998. When ETFO was formed in 1998, he served as first vice-president of the Rainbow District Local for a year.

He was the first male elected to the ETFO provincial executive in 1998 and served as vice-president from 1999 to 2002.

During his time on the executive, the union said Collins “had a very strong commitment to equity and social justice,” supporting the formation of the Equity and Women’s Services department at ETFO and leading the development of the first ETFO policy statements on social justice and equity.

He served as the ETFO representative to the Ontario Men’s White Ribbon Campaign, which promoted the role of men in speaking out about violence against women, and led ETFO in building liaisons with Indigenous communities.

“Ken’s concern for the welfare of teachers and social justice issues has left a lasting legacy for members of the teaching profession,” said ETFO President Sam Hammond. “His early dedication to equity and social justice helped shape ETFO priorities that we still hold today.”

Here are 7 stories to start your day
0