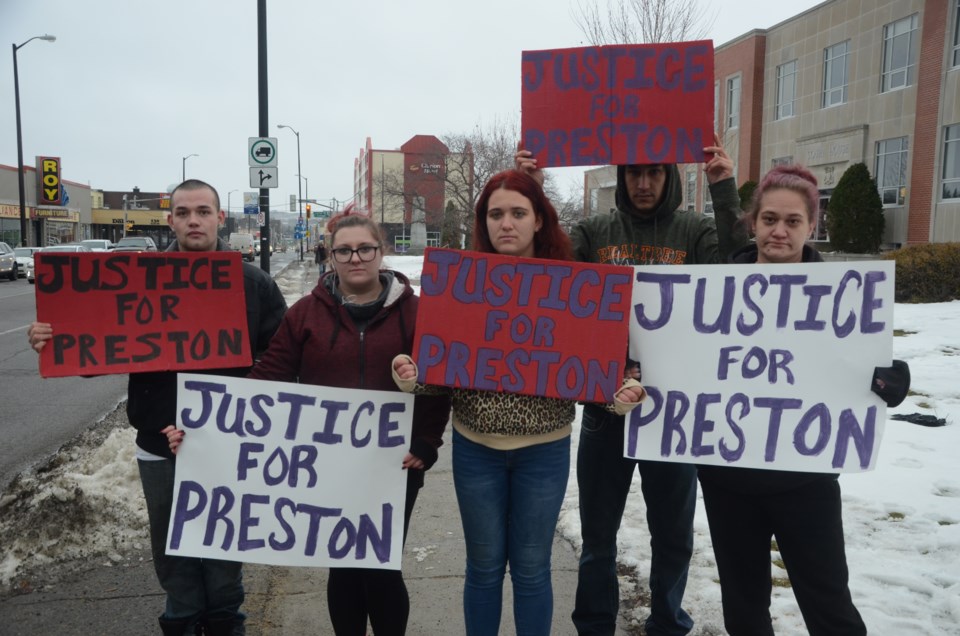 Friends of Preston Pellerin, the teen killed on Nov. 15 on Cedar Street downtown, gathered outside the Sudbury Courthouse Nov. 21 as the man accused of killing him made a brief court appearance via CCTV. (Arron Pickard/Sudbury.com)

A small group of Preston Pellerin's friends gathered outside the Sudbury Courthouse Thursday, holding signs and chanting “Justice for Preston” as his accused killer made a brief appearance via CCTV.

Cassidy Beardmore and Tanya St-Onge were among those friends.

“We're here to keep an eye on what happens in court,” Beardmore said.

Beardmore said she'd known Pellerin for a few years. While he had his issues, “he was a good kid with a great heart,” she said.

St-Onge said they are angry. She was supposed to meet Pellerin downtown the day he was stabbed on Cedar Street, across from the Sudbury Transit terminal.

“I had to call his cousin and let him know,” she said.

They say Pellerin was stabbed because of a $10 drug debt.

Steffin Rees, 18, was arrested and charged with second-degree murder in Pellerin's death. He also faces a drug possession charge, according to Greater Sudbury Police.

He showed no emotions as he appeared in video remand. He will return Dec. 19.

A service will be held Nov. 23 at the Cooperative Funeral Home.

Essential Worker of the Day: Brady Courville
Jul 14, 2020 12:00 PM
Comments
We welcome your feedback and encourage you to share your thoughts. We ask that you be respectful of others and their points of view, refrain from personal attacks and stay on topic. To learn about our commenting policies and how we moderate, please read our Community Guidelines.