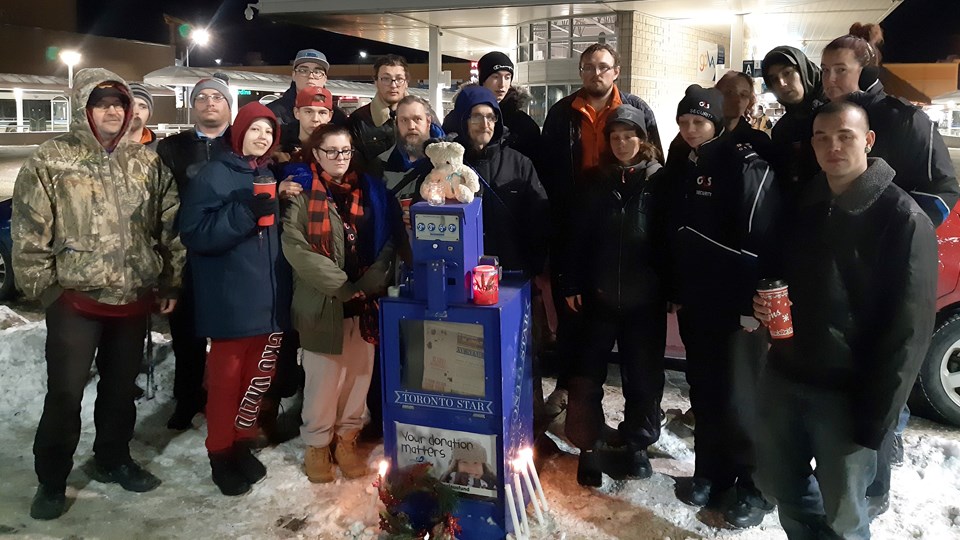 Friends and loved ones of Preston Pellerin, who has been identified as the victim of an alleged homicide on Nov. 15, gather at a makeshift memorial in downtown Sudbury at the site of the teen's death. (Facebook.com / Memorial of Preston Pellerin page)

An 18-year-old has been charged with second-degree murder in connection with a stabbing that took place Friday morning on Cedar Street downtown.

Rees is charged with killing 17-year-old Preston Pellerin, as has been reported by other media, and that Sudbury.com has confirmed. His friends have set up a Facebook page — Memorial of Preston Pellerin — to pay tribute to Pellerin, and gathered en masse Saturday at the spot where he was killed.

“Think of the good times you had with him,” one post read. “He’d want you guys to smile, live the rest of your life for him. He’d want us to be happy.”

The commentators say Pellerin had battled leukaemia and drug addiction, but was making real progress before the attack.

“He lived a short but wild life, he knew how to get people to smile and he was there for anyone,” one post said. “Unfortunately his bad life got to him even tho (sic) he was doing so much better for himself.”

“I just cant (sic) wrap my head around it,” another post said. “I went by where it happened today to tell him I missed him. Many peoples lives (were) affected by this.”

According to his death notice, he was born in 2002 in Yellowknife and had a younger brother.

A service will be held Nov. 23 at the Cooperative Funeral Home.

“Preston loved spending time with older people, listening to stories of their life,” the notice says. “He had a gift for hearing special beats in music which allowed him to mix and make amazing music clips that he as very proud of.”

Donations can be made by cheque or online to the Northern Cancer Foundation (Pediatric oncology).