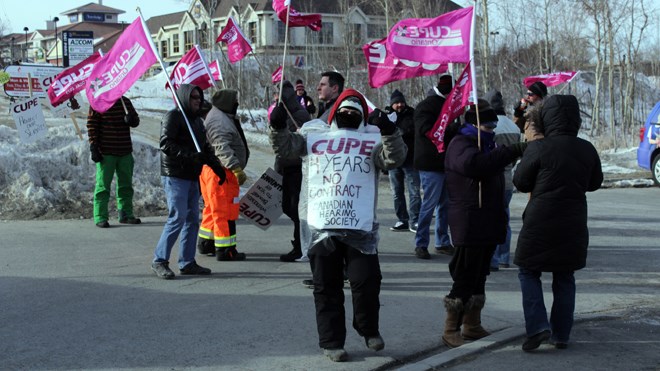 Nickel Belt MPP France Gélinas joined sixteen unionized employees of the Canadian Hearing Society, who are on day eight of a strike after being without a contract for four years. Photo by Callam Rodya

"Anybody who has to walk a picket line when it's minus 30 out needs a little bit of a moral support," said France Gélinas.

The Nickel Belt MPP joined striking members of CUPE Local 2073 outside the Paris Street offices of their employer, the Canadian Hearing Society, on a particularly frigid Wednesday morning.

Cindy Collins, a pyschotherapist and mental health counsellor for CHS, spoke for the striking workers.

"We're picketing out here in the freezing cold because we have been without a contract for four long years," said Collins. "We are trying to get a contract that's fair and equitable. Unfortunately, the employer just seems to want to take things away from us."

Collins says CHS is trying to impose a wage freeze, reduce sick days and benefits and make changes to the group health plan. She says since the strike began, the union has made three attempts to restart negotiations with the employer, but they have not responded.

"Really, all we want is something fair," said Collins. "We all miss our clients but what (CHS) is asking from us is not fair."

Both Collins and Gélinas are encouraged by the support the workers are receiving from their clients, who include individuals of all ages who are deaf or hard of hearing, but it's important for them to get back to work as soon as possible.

"These people work in every school board, they work with the police, they work with everybody," said Gélinas. "Deafness is the fastest growing disability. With aging often comes loss of hearing. We need them to go back to work."

Gélinas also hopes the dispute is resolved soon because the priority, ultimately, should be to grow the size of the support worker staff at CHS.

"We need more of them so we can make sure that, as people age, if they happen to lose their hearing, we will be there to help them to transition so they continue to be connected and won't become isolated with all the problems that come with isolation," she said.

Gélinas says her show of support is also an effort to pressure both sides to return to the bargaining table.

"To be without a contract for four years, without a pay increase, everything has been frozen in time for four years," she said. "Think about how much your hydro bill has gone up in that time. Well, so has theirs. It's as simple as that."

Collins says the union's bargaining team will keep trying to jump-start negotiations in the meantime. While morale is high, she worries that it's ultimately those who depend on their support that will suffer if the strike continues to drag on.