But it was the exchange with Olivier many people were anticipating since Thibeault defected from the federal NDP in December and was appointed the Liberal candidate in Sudbury.
0
Jan 22, 2015 4:13 AM By: Darren MacDonald 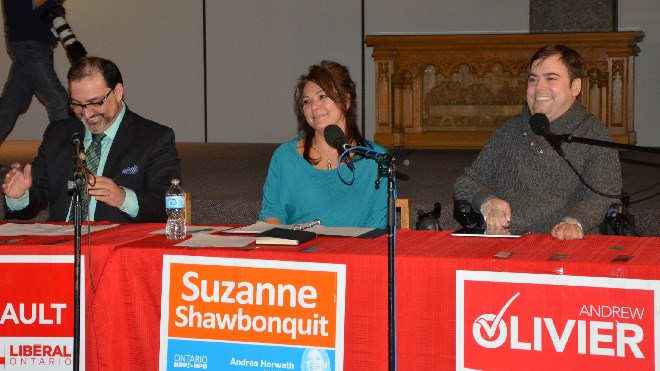 Liberal candidate Glenn Thibeault, left, NDP candidate Suzanne Shawbonquit and independent Andrew Olivier share a lighter moment at Wednesday's debate, put on by CBC Sudbury and held at St. Andrew's in downtown Sudbury. Photo by Darren MacDonald.
But it was the exchange with Olivier many people were anticipating since Thibeault defected from the federal NDP in December and was appointed the Liberal candidate in Sudbury. That upset Olivier, who lost by less than 1,000 votes in June and who had already been selling Liberal Party memberships for another run.

Olivier says Liberal Party officials tried to induce him to support Thibeault by offering him a job or an appointment, and released recordings earlier this month of two of those conversations to back his claims. The OPP have said it is investigating whether Ontario's Elections Act has been broken.

At Wednesday's debate, put on by CBC Sudbury, Thibeault faced as many hecklers as supporters as he talked about his decision to become a Liberal.

“When the time came to say yea or nay, I knew there was going to be catcalls after it,” he said. “The one thing that is important for me, is my beliefs are the same. I'm still the same guy. My party has changed.

“In all sincerity, I'm doing this to try and make my city a better place.”

Olivier challenged him on that, asking what decision Thibeault will make if he wins the election and later faces a choice between what's best for Sudbury and what the Liberal brass want him to do.

“What happens when you have to make a choice for the people of Sudbury, or the decision makers?” he said. “I made that choice ... People want someone who will always choose for them.”

“My priority will always the people of Sudbury,” Thibeault replied. “Do you think I would be going through all this and taking the catcalls if it wasn't?”

He said if he was making a cynical decision for personal benefit, he could have crossed the floor in the House of Commons and waited to fight the fall federal election as the sitting MP. By moving to provincial politics, he knew he would have to face judgment from voters right away.

“It's not about changing views, it's about being heard,” Thibeault said.

NDP candidate Suzanne Shawbonquit also took aim, saying she has never crossed anyone to get ahead, or made a backroom deal for her personal benefit. Thibeault broke many hearts when he abandoned the party, she said.

“We were all shocked when you crossed the floor and defected,” Shawbonquit said. “People loved you and adored you, and they believed in you. Sudbury needs better than that.

“You walked away from some wonderful people ... How can we trust you?”

“I haven't walked away from this city,” Thibeault replied. “I put it right to the voters. They can decide.

“I've sat in that chair, Suzanne. I've seen what (the NDP) is all about. It's all rhetoric.”

“That's why we're going to have a Liberal MPP from Sudbury,” Thibeault responded.

Moderator Markus Schwabe turned to lighter fare in the middle of the debate. We learned, for example, if Green candidate David Robinson was a tree, he would be a pine tree; PC candidate Paula Peroni's favourite movie is 'Gone With the Wind'; Shawbonquit's favourite food is pasta; Olivier was a troublemaker at school; and Thibeault's favourite TV show is 'House of Cards.'

Peroni and Robinson disagreed sharply over a carbon tax, something Robinson has made a centrepiece of his campaign, but something the Tories have started a petition to oppose.

Robinson also touted his credentials as an economics professor, and said he has detailed knowledge about what the city and the province needs to create green jobs in a new economy.

“I know more about most of the issues than the other candidates ... and that should matter to you,” Robinson said. “I would be a lot more effective than one more backbencher.”

By electing a Green candidate, he said Sudbury would make headlines across the country.

“We would get more attention down there than anybody can believe,” he said. “And Sudbury would be (known as) a green city.”

During a discussion on raising minimum wage, Shawbonquit supported increasing it above the current $11 an hour.

“Of course, we're supporting the $15 minimum wage,” she said. “It's a big part of supporting our working families. And ($15) is still not enough, to be quite honest.”

Peroni said she wasn't personally opposed to raising the minimum wage, but said the bigger problem was too many people have part-time jobs because they can't find full-time work.

“If you're working 12, 15, 20 hours a week, you can't make a living no matter what the minimum wage is,” she said. “Government needs to get out of the way ... of small- and medium-sized businesses” so they can create the employment people need.

“I'm of the opinion that it should be more,” Thibeault responded, adding he wants to be the person fighting for a higher minimum wage within government. “We see too many people who are struggling.”

Olivier addressed a question from the floor about whether he thinks it's proper for someone to publicly release recordings of what people thought were private conversations. As he said previously, as a quadriplegic, he can't take notes so he records most of his conversations. But once he went public with his allegations, people began to question his integrity, forcing him to release the recordings.

“Myself, I say what I say. I don't care who else hears,” Olivier said. “I record conversations. So if you have a backroom deal, don't talk to me about it.”

And, in the final reference of the night to the scandal, Thibeault was asked whether the Liberal Party could have done a better job handling his defection from the NDP.

“Yeah,” he said. “But hindsight is 20-20. Of course, anything could have been handled better.”

The night began with a minor incident involving fringe candidate John Turmel, who disrupted Tuesday's CARP debate with his accordion playing, screaming speaking style and references to his criminal past as an illegal casino owner.

After shouting to the crowd that democracy was being suppressed because he wasn't being allowed to participate, he declared he wasn't leaving and said the security guard had no authority to eject him, only Greater Sudbury Police.

It was a rare sight a few minutes later when police arrived and received a cheer from crowd as they removed Turmel -- who then turned on the audience as he was evicted.


Quotes of the night:

“People loved you and adored you, and they believed in you. Sudbury needs better than that.”
– Shawbonquit, addressing Thibeault

“I've sat in that chair, Suzanne. I've seen what (the NDP) party is all about. It's all rhetoric.”
– Thibeault's response

“I record conversations. So if you have a backroom deal, don't talk to me about it.”
– Olivier, on the ethics of releasing recordings of private conversations

“I was not a school board trustee for the money, clearly.”
– Peroni, who said she made $5,000 a year when she was a trustee

“I have a great job. This could be a bad career move.”
– Robinson, an economist who teaches at Laurentian University