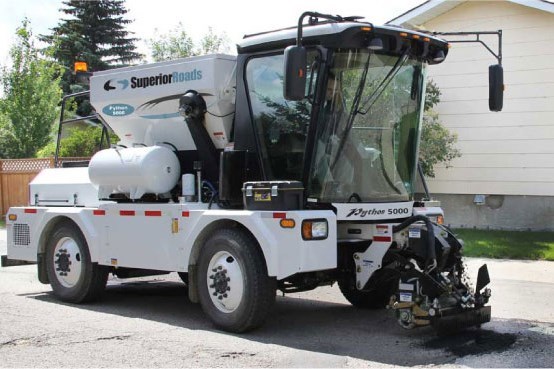 Thunder Bay has been using the Python 5000, a pothole repair machine, for the last two years. (File)

Officials in Thunder Bay are pleased by the performance of the Python 5000, the pothole patching machine that city has been using for the last two years.

According to a story Monday by Thunder Bay News Watch, the municipality is now using the machine to repair long cracks and depressions in area streets, in addition to pothole repair.

The goal, said Thunder Bay roads manager Brad Adams, is to fix cracks that allow potholes to develop in the first place.

“We're basically trying to keep the water from getting into the cracks,” Adams said. “When we get into February and March when we get that freeze/thaw/freeze cycle, if we have been able to keep the water out, we should have less asphalt popping or breaking up.”

Other cities are keeping an eye on Thunder Bay's experience with the Python 5000, including Greater Sudbury. The $360,000 machines can be operated by one person, and the Regina-based manufacturer says potholes can be fixed in as little as two minutes.

“We're sort of waiting to see what happens with Thunder Bay,” Sheppard said.

While the Python filled 1,650 potholes between April and August of 2018, crews in Sudbury normally fill 55,000 in a year – and completed more than 80,000 this year, following a particularly rough pothole season last spring.

That the Python only filled 1,650 in five-month period is a bit of a “red flag,” Sheppard said, but they need a lot more details on how Thunder Bay used the machine before they can determine whether it's appropriate for Sudbury.

While not a pothole patcher, the city is moving ahead with a $700,000 roads pilot project that aims to fix larger sections of city streets than just potholes.

Known as Hot-in-Place Recycling (HIR), the goal is to extend the life of area roads by doing a full repair of sections. First, the area to be repaired is heated, then the top 20-50 mm of asphalt is removed. The bare section is repaired using either recycled asphalt or new material. The top layer then becomes the new road, or can receive a final top layer.

“The advantages of HIR are that elevations are maintained, it is comparatively economical, and needs less traffic control than the other rehabilitation techniques,” the report said.

For the HIR process to succeed, the right road has to be selected, the pavement has to be in decent shape, free of “major structural distress,” and there has to be enough room. When the full system is deployed, the equipment train runs about the length of a football field.

The city is working with a geotechnical expert to identity the best candidates for HIR, but the leading candidates are The Kingsway, MR35, and Skead/Radar Road.