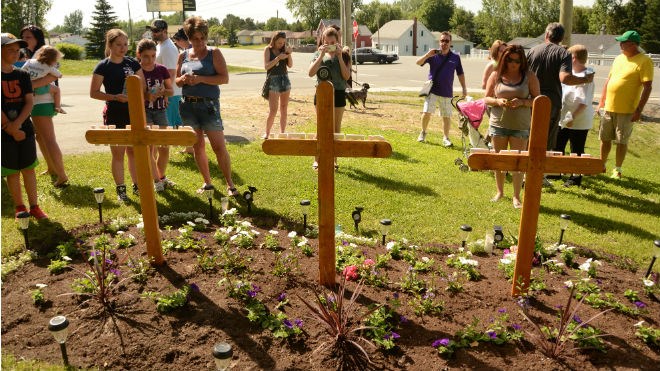 Nicolas Piovesan was serving a seven-year sentence after being convicted on three counts of causing death by criminal negligence for the June 21, 2009, drunk-driving deaths of Sudbury teens Jazmine Houle, Caitlin Jelley and Steven Phillipe.

Piovesan, who had been drinking at a bar, drove into the three young people as they were walking along a sidewalk in Hanmer. He didn't stop after he hit and killed the three. Instead, he fled the scene and was only stopped after crashing into a house.

The pain of that day continues to haunt her family, Joscelyne Phillipe told NorthernLife.ca today. And while they've come to accept that, knowing that Piovesan gets to live the rest of his life while her son, and the daughters of two other people, can't is something that still weighs on her.

This year, the walk is going ahead as planned, but holds a special significance in that it coincides with Father's Day, Phillipe said.

Piovesan serves one-third of his sentence in the community, Cindy Golemiec, regional communications officer with the Parole Board of Canada Ontario, told NorthernLife.ca in February.

The Parole Board imposed a number of release conditions on Piovesan.

In a Feb. 6 decision, the board states the now 31-year-old must abstain from alcohol and refrain from entering any establishment where alcohol provides the primary source of income such as bars, taverns and liquor and beer outlets.

“Alcohol was the primary contributing factor to the offence, and your drinking was done in what was described as a bar/grill/pool hall,” the board said in its decision to Piovesan. “Therefore, these two conditions are necessary to manage any risk you might pose, although the board notes there is no indication you have had a drink since the night of the offence.”

A 10-year driving ban began the day of Piovesan's release, and he is banned from owning or operating any motor vehicle to “further reinforce the importance of this prohibition,” said the board in its decision.

Piovesan will not be allowed to contact, directly or indirectly, any members of the families of the three victims, a decision meant to “spare them from further trauma.”

In its statement, the Parole Board said it received statements from family members of the victims relating to Piovesan's release.

“It is clear that your actions on June 21, 2009 forever changed the lives of many people,” said the Parole Board. “The family and friends of the three young people killed that night continue to suffer, as does the community who were shocked and traumatized by the magnitude of the loss.”

Piovesan will be living in a community 90 kilometres away from Greater Sudbury. The exact location isn't provided in the board's decision.