Topper's Pizza plans to expand to 140 restaurants by 2018

Topper's Pizza is about to undergo the biggest expansion in the company's history, with an ambitious plan to open 104 restaurants across Canada by 2018. Ron Toppazzini opened the first Topper's restaurant in Sudbury in 1982.
Jun 6, 2014 2:51 PM By: Jonathan Migneault 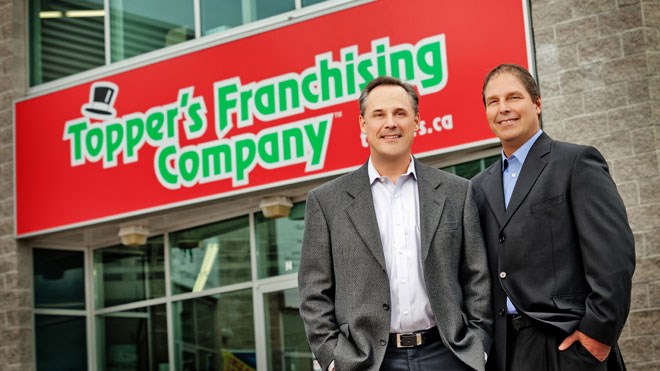 opper's president and chief operating officer Keith Toppazzini, left, and his brother, Kelly Toppazzini, the company's chairman and CEO, plan to have 140 Topper's pizzerias in Ontario, Manitoba and Alberta by 2018. Supplied photo.

Topper's Pizza is about to undergo the biggest expansion in the company's history, with an ambitious plan to open 104 restaurants across Canada by 2018.

Ron Toppazzini opened the first Topper's restaurant in Sudbury in 1982. The restaurant was the continuation of a long family history in the food industry, dating back to 1904 with Toppazzini's bakery in Copper Cliff.

The family recipe for Italian bread became the basis for the Topper's Pizza crust.

The company started franchising in 1992, and has since expanded to 36 restaurants across Ontario, ranging from Timmins in the North, Ottawa to the east and Newmarket to the south.

Today Toppazzini's sons, Keith and Kelly Toppazzini, head the company. Keith is the Topper's president and chief operating officer, while Kelly is the chairman and CEO.

“We believe the time is right,” Keith said about the upcoming expansion. “There's a great demand for our style of product and we have a great team to get us there.”

To expand to 140 stores – planned for Ontario, Manitoba and Alberta – Topper's brought in Jeff Dillon, a restaurant industry veteran who previously worked for Timothy's and the Chili's chains of restaurants, as its new vice-president.

“He's got a lot of experience in food and we really enjoy his style of leadership,” Keith said. “He's been very effective thus far.”

The company has some new menu items in the works, but pizza will always be the core product, Keith said.

“Our goal for Topper's is to be the first choice for pizza in every neighbourhood we serve,” he said.