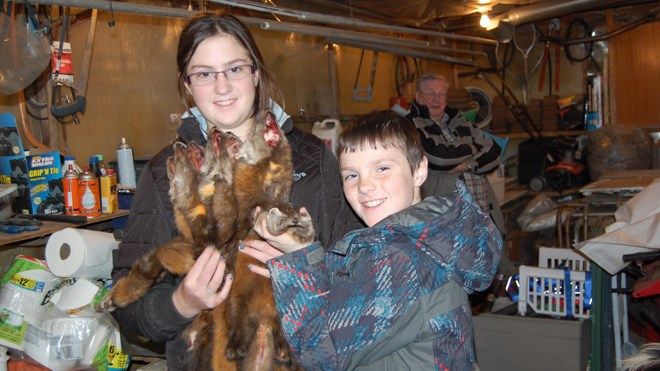 Laurentian University student Evelynn Hoffman on her family's trapline in Long Lac. She said she wants to raise awareness of the benefits of trapping. Supplied photo.

When she's attending Laurentian University, second year communications student Evelynn Hoffman is able to access urban amenities such as going to a movie.

Not so when she's at home in Longlac, a small community located about three and a half hours northeast of Thunder Bay, in the Greenstone area.

People there mostly spend their time in the outdoors, she said. Her family, for example, has its own trapline.

Before she moved to Sudbury to attend school, Hoffman often used to accompany her family as they tended their trapline, mostly using snowmobile.

Hoffman said her mom also uses some of the furs to make into mittens herself.

The student said she enjoys going out trapping with her family, as it gets her outdoors.

When Hoffman's communications class was asked to write about an under-reported issue, she chose to talk to the Sudbury Area Trappers Council.

She wrote about how the local trappers' council does a lot of good, including providing assistance to families of children who must travel out of town for medical treatment.

Her paper also explains how trappers are often shown in a negative light in the media.

She said she wants to raise awareness that trappers can play a part in maintaining animal population levels.

“I find a lot of people accept hunting,” Hoffman said. “If I say I go hunting people say 'Oh OK, that's cool.' But when you say you're trapping, that's when people say 'What do you mean trapping?' They start thinking animal cruelty and animals are suffering.

“But really, we're not the bad guys out there. We do a lot of good. We say we help maintain population levels, and some people are like 'Why doesn't nature do that itself?' But nature can be cruel. It can be suffering a slow death vs. us (what trappers do). Nature can't manage populations all the time.”