BY HEIDI ULRICHSEN Two area French Catholic churches will close next spring because of financial problems and declining attendance. La Toussaint in Minnow Lake and St-Eugene in the city’s South End will shut their doors May 27, 2007.
0
Aug 3, 2006 11:52 PM By: Sudbury.com Staff 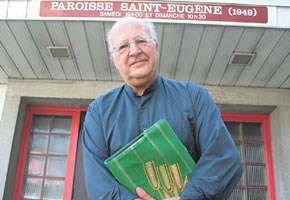 Father Ron Perron of St-Eugene (above) and Father Chrysologue Allaire of La Toussaint will jointly run Ste-Anne-des-Pins, which currently has no priest.

Two area French Catholic churches will close next spring because of financial problems and declining attendance.

La Toussaint in Minnow Lake and St-Eugene in the city’s South End will shut their doors May 27, 2007.

Starting this September, services will be scaled back at both churches to a weekly Saturday evening mass and weddings and funerals as needed.

About 300 parishioners will move to Ste-Anne-des-Pins in downtown Sudbury when their churches close. They can also attend Sunday mass and other services at the downtown church starting this fall.

Father Ron Perron of St-Eugene and Father Chrysologue Allaire of La Toussaint will jointly run Ste-Anne-des-Pins, which currently has no priest. The closing churches will be put up for sale, with the proceeds going to Ste-Anne-des-Pins.

“We’ve been talking about closing the church for the past seven or eight years. We’ve been surviving due to the Knights of Columbus bringing in money through bingo,” says Marc Forget, secretary of the parish council at La Toussaint.

Forget, 66, has attended La Toussaint since he was a toddler. He’s made a lot of friends there, but says many of those people no longer attend services.

“I’m quite pleased to go to Ste-Anne and be part of a new community, because I don’t see how we can survive here in the present situation. I’ll be offering my services over there,” he says.

“Some people are saddened though—mostly older people who have lived here their entire lives. It’s hard for them to accept the church is closing and they have to go elsewhere.”

Arnel Michel, who is on the St-Eugene parish council, was shocked when he heard his church was closing.

“I think we’re sad, but we also understand that it was the best thing for the church and the diocese.”

Perron says it’s difficult for his parish, St-Eugene, to pay its heating and insurance bills, although it is better off than La Toussaint.

His colleague, Allaire, is 83 years old, and expected to retire soon, leaving La Toussaint without a leader.

Catholic priests, especially French-speaking ones, are declining in number and difficult to replace, says Perron.

“The bishop thought it was best that we (Allaire and I) were together, and try to create a stronger community at Ste-Anne.”

The auxiliary bishop of Sault Ste. Marie diocese, Robert Harris, says he wants to “weave” the three parishes together to form one big community.

“That’s different than saying, ‘We closed La Toussaint, we closed St-Eugene, so you’ll go to Ste-Anne now,’ and the people of Ste-Anne receive the new people,” he says.

“The idea is the three parishes work at becoming one large Catholic French-speaking community that serves the centre of the city.”

With an aging population, less people are going to church, and fewer parishes are needed, says Harris.

“Some churches that were established to serve the people are now serving a very small quantity of people,” he said.

“It’s kind of inevitable that as these people get older and there’s no new life coming to the church, those communities end up having to close or become part of a bigger body.”