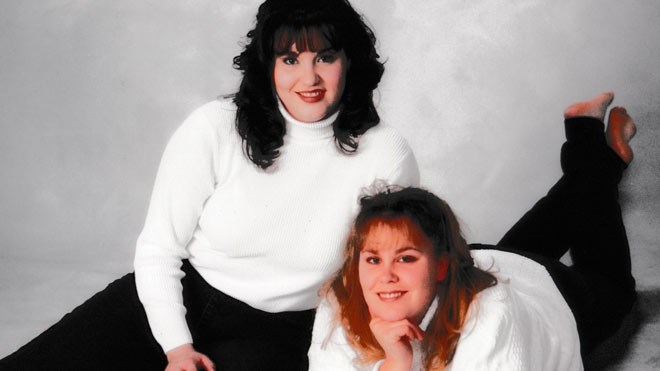 Renée and Kim Sweeney are seen here in a studio shot taken a few months before Renée's murder in 1998. (Supplied)

Canada has one of the world's highest rates of multiple sclerosis, and one Sudbury family knows this perhaps better than most.

Renée Sweeney's sister is holding a porketta bingo fundraiser in support of the Multiple Sclerosis Society of Canada at the Beef and Bird restaurant May 24 in memory of the murder victim as well as her late parents.

She placed the stickers at several local businesses, asking for donations to the MS Society, Pet Save or SPCA Sudbury.

However, Kim said most of the sticker donations actually went to Pet Save, and she wanted to do something to raise funds specifically for the MS Society.

Both of her parents lived with MS. Kim and Renée's mother, Carole Strachan, passed away due to the condition in November 2016, just a couple of years before a suspect was finally arrested in her daughter's murder.

“This cause is dear to my heart,” Kim said.

She said she got the idea for a porketta bingo fundraiser from a similar event held in support of her son's high school hockey team.

“It was a blast,” Kim said. “I thought let's do something fun to honor my sister.”

As you'd expect at a porketta bingo event, you can win some delicious, spiced pork to share with your table-mates. But Kim said she's also solicited about $3,000 worth of donations from local businesses for raffles.

“I have got some wonderful prizes,” she said, adding she's also planning to hold a 50-50 draw.

Kim said she wants to raise a minimum of $5,000 for the MS Society.

Natalie Labbee, fund development and community engagement co-ordinator with the MS Society's Sudbury-Manitoulin branch, said the fundraiser is most welcome.

She said the MS Society is always really happy when people step up to put on their own fundraisers, as the charity doesn't have many staff members. “It's pretty exciting,” Labbee said.

She said she actually thought about reaching out to Kim Sweeney in the wake of the arrest in the Renée Sweeney murder case in December of last year, given the sisters' parents both lived with MS.

“I thought, at some point I want to connect with this lady, but it was so fresh,” Labbee said. “But she ended up communicating with me first.”

The fundraiser comes at a good time, as sometime between May 13 and May 14, donations were stolen from the MS Society's downtown Sudbury office in a break and enter.

Coincidentally, in early May, a man posing as Kim's brother-in-law went to a local business and tried to collect donations people had given in exchange for the memorial stickers.

The would-be thief didn't get any money in this incident, as the business in question never had any stickers in the first place.

Tickets cost $25 each, and include two bingo tickets and a ticket for the 50-50 draw. Information on how to purchase tickets is available through the event's Facebook page.