Local media, including Northern Life, have been privy to a 94 page confidential strategy document from Vale Inco workshop last summer, June 15 and 16th, outlining some possibilities for its Sudbury operations.
0
Jan 24, 2010 7:30 PM By: Bill Bradley 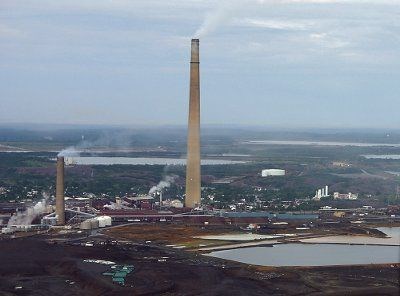 A Vale Inco document leaked to local media outlines major restructuring for its Sudbury mining operations including a one mine approach and producing the same amount of ore with significantly less employees. File photo.

Local media, including Northern Life, have been privy to a 94 page confidential strategy document from Vale Inco workshop last summer, June 15 and 16th, outlining some possibilities for its Sudbury operations.

At that time the the company had shut down production at its Sudbury operations and the current strike involving Steelworkers Local 6500 had not yet occurred. Nickel prices were also substantially lower when the workshop occurred.

The possibilities discussed at that period of the Vale Inco workshop include reducing the cost of producing nickel at its area mines and reducing staffing.

“If we don't change now-we will look like Xstrata in five years-will be out of business,” said one line in the power point presentation document.

Here are some points made in the document:
-nickel demand is back to 2002 levels

-20 percent of the nickel business is “under water” at current prices-a lot of capacity (30 percent?) has been taken off line-industry is in a survival mode

-in Ontario the strategy is to postpone growth projects, conserve cash, and leverage the best assets

-cost structures must improve-must get costs down to $2.50 a pound from a current cost of $4 to $5 a pound

-nickel business has to re-invent itself: Fred's (Stanford) departure will signal a big change in the way the business is run-Stanford, Ontario president of Vale Inco operations, left June 09

-Sudbury mines much higher in employment than corresponding “world class mines”-almost double-wasted value; Sudbury mining costs 50-100 percent higher than the curve-$50 per tonne, at 8 million tons per year-equates to a $400 million opportunity-differences are largely in numbers of direct employees

The document mentions a one mine concept-that all various underground operations be considered as different aspects of one mine. That means “there is need to introduce language to enable flexible transfers between mines as required for example,” states the document.

“One mine approached clearly identified-same shift schedule, one set of job classifications, concise timetable and plan for implementation,” is discussed as a goal in the document.

Furthermore, productivity has to increase by another 25 percent with employment levels of 1,500 able to produce 200 million pounds of nickel, stated the document-less people and equipment while producing the same amount of assets.

According to John Fera, United Steelworkers Local 6500 president, the document was news to his union.
“It deals with efficiencies and job loss. It is a report by staff and consultants. It talks about 2,000 to 1,800 jobs in the mines. I don't know if this is a working document or a what if document,” said Fera Saturday at the Prorogueing of Parliament rally at Tom Davies Square.

He said the existence of a report like this dealing with sensitive union issues such as job losses was not helpful to the current labour dispute with the company.

One part of the document touches on the value of “engaged employees”. These employees lead to a lower turnover rate, are more productive, taking less sick time, have fewer accidents that lead to lost work time, and tend to be part of a high performance culture where employees are focused on future direction and strategies. That culture, the document notes, can lead to a 65 percent greater share price increase and up to 30 percent greater customer satisfaction.

Dick Destefano, executive director of the local area mining supply and service companies (SAMSSA), emailed his membership of 103 companies, mostly in the city indicating concern for them, as cutting costs by Vale Inco will not only mean layoffs but reducing costs for supplies.

However, despite lower volumes of work, mostly due to the current labour dispute and the general economic situation, his members are quite busy, he said.
“Our guys believe in going global. This sector is huge and has a lot of potential to grow,” he said. He has heard of only one firm going bankrupt out of approximately 300 mining supply and service companies in the northeast.

DeStefano himself was not sure how important the document really was in predicting what strategic plans Vale Inco had.
“It was prepared by a university professor, Peter Richardson from Queen's University. There is a lot of vagueness in the document.” He said he too like Fera was unsure whether the report was a what if or working document.
“Maybe it is a bit of both,” he said.

One comment he made is that there is a feeling by many in the city that Vale Inco operations are overstaffed.
“Maybe they realized that themselves and that is why they are considering staff reductions,” he said. Another issue is the change of pension plans for new employees, a main issue for the company.
“Maybe they have focused on that as a way to significantly reduce labour costs.”

Northern Life has attempted to contact Vale Inco about the document and was still awaiting comments at press time.