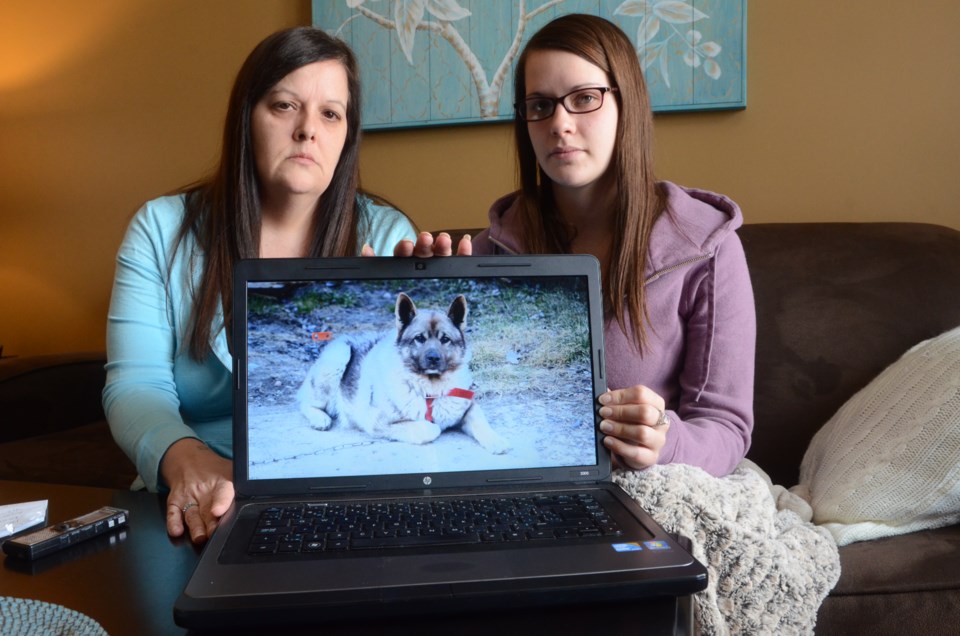 Terry Matthews and her daughter, Kayla, show off a photo of their dog, Tonka, an eight-year-old purebred Norwegian elkhound who was attacked Jan. 4 by two other dogs. Due to the severity of his injuries, Tonka was euthanized. Photo: Arron Pickard

The story of a Norwegian elkhound from Lively that was euthanized after being viciously attacked by two other dogs is receiving international attention.

Elkhound Facebook groups in the United States are reaching out to Terry Matthews to let her know there are hundreds of people there who are aware of what happened and who sympathize with her story. There are numerous Facebook groups around the world dedicated to the love of Norwegian elkhounds, and their members number in the thousands.

“What we want is to let Terry know there are a lot of people in the elkhound community who support them, and we'll be raising money to see if we can help out with some of the vet fees, or if they are ever looking for another elkhound, that we might be able to help with those fees.”

In Pennsylvania, residents would be allowed to shoot a dog attacking another dog, he said.

“We are allowed to protect our animals, and it's a shoot-first-ask-questions-later scenario,” he said. “Had it happened at my house, they would have had a slug in their ass. It's a shame it happened that way, and a lot of people are hurting over it.”

Norwegian elkhounds a very strong breed that goes back more than 5,000 years. They are kind of a rare dog, he said, and while they can be very stubborn, they are also very loyal dogs.

“I wouldn't give my dog up for any thing, and she wouldn't go anywhere anyway,” he said.

Like many people who have commented on this story through social media, Williams said it's the dogs' owners who need to be held accountable.

“You have to remember the dogs didn't start out bad dogs; it's bad owners that are the reason these dogs are doing what they are doing,” he said.

And the backlash from the Greater Sudbury community can be felt everywhere, but perhaps nowhere more than on social media.

On Sudbury.com's Facebook page, readers have clearly picked sides in this story.

Here are only a fraction of the comments on our Facebook page:

Debbie Slywchuk: I would be traumatized! If this was the second attack by these dogs, it was intentional and malicious. As a dog lover and animal advocate, I think there is no other answer here but to euthanize those vicious dogs before anybody or animal is victimized again. The owners should also be responsible for Tonka's vet bills, we all know these are expensive. Kudos to this lady for not taking civil action, speaks to her integrity for justice for her beloved pet and not greed. My sincere sympathy for you all, this is heart breaking.

Laurie Zuliani: I know the owners. Those dogs are a result of people who should have never had animals and the conditions they had to live in. Those dogs don't remember being walked, and going outside for a second longer than doing their business was a treat. If not put down, I hope those dogs have a chance to at least experience a fraction of what I know Tonka was blessed to have. So sorry. Can't imagine what you are feeling. Thoughts are with you. You have a lot of support.

On the Facebook page What's Going On In Lively, site administrators have deleted numerous comments and posts about the incident, saying the page is meant to share activities and events in the area, as well as a safety tool for wildlife spotting, or unsafe events happening.

“When responding to topics keep in mind: name calling, threats, and foul language will not be tolerated,” said the administrators in a post.

In the comment section on stories related to the incident, a great deal of anger is directed at the owners of the dogs believed to have attacked Tonka.

An online petition, which can be accessed here has been started calling for stricter animal control enforcement and for the removal of the two dogs that attacked Tonka on Jan. 4.

The author of the petition, Kayla Manninen, says on site the city's bylaw regarding animal control needs to be re-evaluated, and that it's being done to ensure nothing like what happened to Tonka happens again, especially with the two dogs involved.